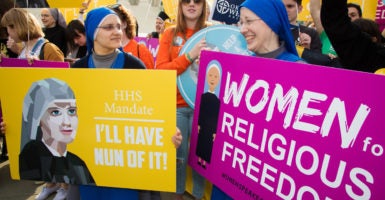 The Trump administration took a step toward protecting religious freedom Thursday by establishing a new division of the nation’s largest social services agency that marks a dramatic shift from the Obama administration.

“We face today a time of rising religious persecution … a new orthodoxy, and it is intolerant of dissent,” @GOPLeader says.

During a ceremony at the headquarters of the Department of Health and Human Services, officials announced the opening of the Conscience and Religious Freedom Division. The division is part of the HHS Office for Civil Rights, an enforcement arm.

In remarks at the event, House Majority Leader Kevin McCarthy, R-Calif., said the Obama administration’s message was, “Now is not the time for freedom; it is time for you to conform.”

“We face today a time of rising religious persecution,” McCarthy said. “It’s not violent. It’s not done in the name of God. But it is a new orthodoxy, and it is intolerant of dissent.”

During the Obama administration, the Department of Health and Human Services was involved in yearslong litigation with an order of Catholic nuns, the Little Sisters of the Poor, as well as other faith-based charities who did not wish to pay for employee health plans that cover the cost of contraceptives and abortion-inducing drugs, as mandated by Obamacare regulations.

McCarthy noted that the government of his own state, California, has required pregnancy centers to publicize where women may get abortions. The measure is in court.

“Nuns have been forced to put aside their lives of service to the elderly and the sick and have to go to court, humbly requesting that they not be required to pay for practices that end the lives of children,” McCarthy said.

Referring to the lack of protection under the Obama administration HHS for deeply held religious beliefs and matters of conscience, the California Republican added:

What a difference a year makes. This same agency is now opening a Conscience and Religious Freedom Division within its Office of Civil Rights devoted to nothing more than treating people fairly and with justice.

No one should be forced to choose between helping sick people and living by one’s deepest moral or religious convictions, and the new division will help guarantee that victims of unlawful discrimination find justice. For too long, governments big and small have treated conscience claims with hostility instead of protection, but change is coming and it begins here and now.

“Health care providers who are Muslim, Sikh, Orthodox Jewish, or any other faith, deserve the right to provide medical care without violating their deeply held religious beliefs,” Lankford said at the event.

“For a nation as diverse as America, it is important for our civil rights laws to protect our First Amendment rights as much as possible,” the Oklahoma Republican said. “In America, we have the free exercise of religion—individuals cannot just have a faith, but they can also live out their faith outside of the confines of their home or place of worship.”