NAFTA Is Essential to Expanding US Energy Dominance 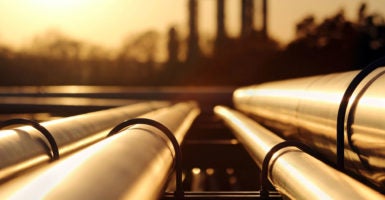 Since the expansion of hydraulic fracturing and horizontal drilling technologies broke the trend of high energy prices in 2014, Americans have prospered—not only from lower energy prices, but also increased economic growth.

As access to abundant energy sources increases, businesses reaping the benefits of affordable energy have expanded their investments in people and equipment.

In fact, over the past year, U.S. energy production has expanded to the point where the industry is not only able to provide for its citizens, but also to reach beyond our borders. 2017 marked the first year in over half a century that America became an annual net exporter of natural gas.

Similarly, net imports of petroleum from foreign countries is the lowest since 1970.

With the country solidifying its global energy dominance, Congress and the Trump administration must continue to encourage the implementation of freer markets and freer trade to take full advantage of the current energy revolution.

To this degree, American energy producers must be allowed to compete free from the grip of onerous regulations. The previous administration piled regulations on conventional fuels in an attempt to coerce the U.S. energy portfolio in favor of subsidized renewable power.

To further free up the energy market, deregulation is not enough. Rollbacks in energy subsidies for all energy sources and technologies must also occur. Doing so will allow prices to accurately signal production quotas for energy providers, free of any manipulation from political pressures attempting to select marketplace winners and losers.

In the absence of such subsidies, the market will force energy companies to either innovate or exit the market.

This concept has already proven itself in the oil and gas industry where, for years, the lower production costs of the Middle East gave way to the development of more efficient extraction in the U.S. Today, American energy companies continue to innovate to be competitive in an era of low oil prices.

And it’s paying off. Fatih Birol, executive director of the International Energy Agency, recently testified for the Senate Energy and Natural Resources Committee, saying one of the major global shifts in the global energy system is that the U.S. is becoming the “undisputed” leader in oil and gas production.

Birol said, “The remarkable ability of producers to unlock new resources cost-effectively pushes the combined United States oil and gas output in 2040 to a level 50 percent higher than any other country has ever managed.”

To further capitalize on America’s energy abundance, the current administration must also look to strengthen free trade—particularly with two of the U.S.’s most significant energy trading partners, Canada and Mexico.

Because the United States has strategically developed refinery capabilities in both the Midwest and Texas, it has positioned itself as a lucrative exporter of refined oil and gas goods. For example, refineries in the gulf coast region have allowed the U.S. to become Mexico’s largest importer of crude oil, but also the country’s largest source for refined fuels.

Likewise, Canada has proven itself as a beneficial importer of U.S. refined goods, as well as an indispensable exporter of crude oil and natural gas for northern American consumers who rely on the cheaper costs of production brought about by the Canadian pipeline network.

Beyond expanded energy production and choice, the tightly connected markets of our neighbors will pay dividends in the future. Notably, as Canadian oil extraction grows over the next 10 years, the U.S. stands to gain over $45 billion in added gross domestic product as well as the creation or sustention of over 400,000 jobs.

Because energy is so intertwined in the American economy, these benefits multiply beyond the oil and gas industry. With each created or sustained job, two additional jobs are projected to be either created or maintained elsewhere in the economy as a result.

Consequently, the current administration must maintain the free trade principles of the already-functioning North American Free Trade Agreement to bolster the energy industry and the individual prosperity that results from less restrictive commerce.

As the U.S. leads the energy revolution, policymakers must afford the industry the opportunity to succeed.

By decreasing regulations and allowing markets to flourish, while also ensuring that America can leverage its technological capabilities through free trade, the expanding energy industry will continue to provide hundreds of millions of Americans—as well as citizens of neighboring countries—with the essential energy needed to power their lives.