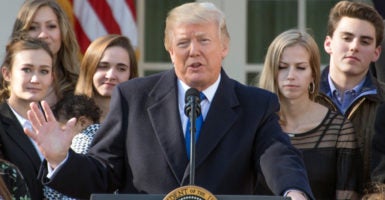 President Donald Trump called on the Senate to vote on banning late-term abortions when delivering livestreamed remarks to the 45th March for Life in Washington.

“I strongly supported the House of Representatives’ pain-capable bill, which would end painful late-term abortions nationwide, and I call upon the Senate to pass this important law and send it to my desk for signing,” Trump said during his Rose Garden remarks Friday.

Trump’s message went live on the jumbotrons to the thousands gathered in Washington for the event protesting abortion just two days before the anniversary of the Roe v. Wade decision that required abortion be legal in every state.

“Roe v. Wade has resulted in some of the most permissive abortion laws anywhere in the world,” Trump said. “For example, the United States is one of only seven countries to allow elective late-term abortions, along with China, North Korea, and others.”

The House-passed bill includes exceptions for rape, incest, or to save the life of the pregnant woman.

The House passed the Pain-Capable Unborn Child Protection Act in October with a vote of 237-189. Currently, only seven—Canada, China, the Netherlands, North Korea, Singapore, Vietnam, and the United States—allow the procedure.

Trump seemed to misspeak when he said, “in a number of states, the law allows a baby to be born from his or her mother’s womb in the ninth month. It is wrong. It has to change,” likely meaning torn instead of born.

Vice President Mike Pence introduced Trump as the “most pro-life president in history,” noting his accomplishments.

Trump remarked that Americans are more pro-life than ever, and that only 12 percent support abortion on demand at any time. While past presidents have delivered recorded addresses to the movement, Trump’s live speech marked a first.

He called the March for Life a “movement born out of love.”

“I’m honored and really proud to be the first president to stand with you here at the White House to address the 45th March for Life. This is a truly remarkable group,” Trump said. “Because of you, tens of thousands of Americans have been born and reached their full, God-given potential. You are living witnesses to this year’s theme, love saves lives.”