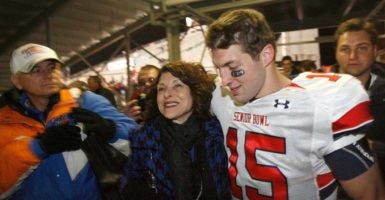 Speaking at the 45th annual March for Life, Pam Tebow shared her story of her pregnancy with Tim Tebow, a former NFL quarterback.

“From the beginning, it was a difficult pregnancy,” she said.

Tim had a tumor, so the nurse said she needed to abort him “immediately” or she would die in childbirth, Pam Tebow recounted. But because of her “love for life in the womb” she “refused” to have an abortion.

She also shared her husband’s experience and how he prayed to God for support. She told listeners that her husband said, “Lord, if you give us a son, we’ll name him Timothy, which means honoring God.”

Human Life International did research and estimated that at least 12 Heisman Trophy winners have been aborted since Roe v. Wade, she said. “Love prevented our Timmy from being No. 13.”

After Tim Tebow graduated from the University of Florida, he and Pam Tebow made a commercial for the Super Bowl with Focus on the Family, a conservative organization. It was a “funny and simple” 30-second commercial, she said.

“Thanks to our noisy opponents and the ever-present media, the message got out,” Pam Tebow added.

Barna Group did a survey of 1,001 people who saw the commercial and estimated that 5.5 million people rethought their position on abortion because of that commercial. Pam Tebow said she and Tim Tebow have held babies who have been “saved” by that commercial.

One of the people who viewed the Tebow Super Bowl ad was a teacher, Pam Tebow explained. The teacher watched that commercial 25 times and on the 25th time, she chose to have the baby and “named her Aveda” which means “life,” she said.

Before they left to march, she told the crowd again that “love really does save lives.”