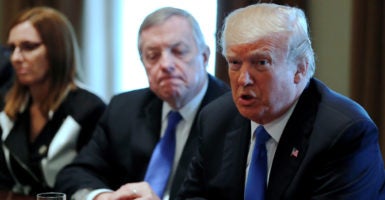 President Donald Trump and the Republican Congress should support and prioritize conservative policies this year, including killing off Obamacare and standing tough on illegal immigration, a conservative action group says.

The Steering Committee of the Conservative Action Project (CAP) released a memo calling on both the legislative and executive branches to prioritize specific policies as the White House readies its legislative agenda for 2018 ahead of Trump’s State of the Union address on Jan. 25.

Twenty individuals and organizations were behind either the creation of the memo or took part in sponsoring it. They include Jenny Beth Martin, chairman of Tea Party Patriots Citizens Fund; Adam Brandon, president of FreedomWorks; and Lisa B. Nelson, CEO of the American Legislative Exchange Council. Mike Needham of Heritage Action for America and Becky Norton Dunlop of The Heritage Foundation signed it as well.