The ‘Dreamers’ Have No Right to Demand Anything 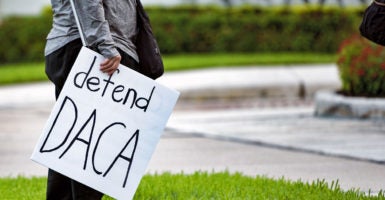 Nearly 200 protesters were arrested on the steps of the Capitol at a rally in December.

The occasion? Thousands had gathered there to demand that Congress pass “Dream Act” legislation to protect from deportation young “undocumented” immigrants brought to this country by their illegal-alien parents.

Many of those who took part in that demonstration—as well as in an encampment on the National Mall and in a series of sit-ins in congressional offices—are themselves these so-called “Dreamers,” who would be the beneficiaries of the legislation they’re demanding Congress enact.

Far from being in “the shadows,” as we are constantly told, these illegal immigrants are unabashedly out in the open at these demonstrations.

“I am somebody! And I demand full equality!” about a dozen of them bellowed last week in the corridors of the Russell Senate Office Building, according to a report in The Washington Post. “Right here. Right now.”

Can we just say it? There’s something unseemly—and unsavory—about anyone who is in the country illegally “demanding” anything.

Emboldened by eight years of President Barack Obama’s de minimis efforts to stem the tide of illegal immigrants flooding into the country, the estimated 700,000 “Dreamers” in effect are saying, “We have a right to stay.”

Is this any different than shoplifters demanding that they be allowed to keep what they—or, in this case, their illegal-immigrant parents—have stolen?

There are laws on the books against being in possession of stolen property, even if you weren’t the one who stole that property.

The heartstring-tugging “they were brought here through no fault of their own as kids” PR campaign by the “Dreamers” and their megaphones in the liberal media doesn’t change that fact.

Orchestrated by countless immigrant rights groups, the demonstrators have denounced President Donald Trump’s tough immigration policies, which have reduced illegal border crossings to a 45-year low, according to a Dec. 5 report by the Department of Homeland Security.

But the protests are now primarily intended to bring pressure to bear on Democrats in Congress to find a way to replace Obama’s Deferred Action for Childhood Arrivals executive order, an unconstitutional action that shielded the “Dreamers” from deportation and enabled them to receive renewable two-year work permits, seemingly in perpetuity.

Obama promulgated DACA in June 2012 after repeatedly acknowledging he had no legal—much less, constitutional—authority to do so.

As such, Trump had little choice but to rescind it, although he did give Congress until March 5 (when the work permits begin expiring) to enact DACA, or something like it, into law in proper, legal fashion.

A number of bills before Congress would do just that, allowing the young illegal immigrants to remain in the country legally (and presumably permanently), cleaning up the mess Obama created.

In a galling show of ingratitude, however, those same “Dreamers”—the would-be recipients of our solicitude, which we’re under no obligation to provide—are demanding that any Dream Act legislation be a “clean” bill.

By “clean,” they mean that the legislation should not accede to Trump’s insistence that DACA be coupled with other provisions to strengthen border security and to reform our immigration laws.

The “Dreamers” were furious at Senate Democrats last week for their unwillingness to try to hold hostage a stopgap government funding bill to get DACA passed.

There was delicious irony in Democrats being hoisted on their own petard over not wanting to be seen as responsible for shutting down the government in the process.

This was an uncharacteristic instance where, when the open-borders lobby yelled “Jump!” Democrats didn’t whimper, “How high?”

It’s not bad enough that the “Dreamers” are making demands that they have no right to make in the first place. They also want those demands fulfilled on their own terms.

That should be a nonstarter, because Trump and the GOP border hawks hold all the cards in this debate.

Republicans should not blithely deal those cards away, despite the 35 centrist and liberal House Republicans providing them cover in calling for the “Dreamers” not only to be legalized, but also to be given a 10-year path to citizenship.

It’s not clear whether these three dozen Republican lawmakers are suicidal or merely self-delusional in thinking they or their party would get any credit, much less votes, from the illegal immigrants—who comic Jay Leno once half-jokingly called “undocumented Democrats”—if they were granted citizenship, and with it the right to vote.

The Republican leadership on the Hill has indicated that floor time will be set aside for debating Dream Act-style legislation in January, but if that was a signal that they might be going wobbly, Trump made it clear Dec. 29 that he is not.

“The Democrats have been told, and fully understand, that there can be no DACA without the desperately needed WALL at the Southern Border and an END to the horrible Chain Migration & ridiculous Lottery System of Immigration, etc.,” the president tweeted Friday morning. “We must protect our Country at all cost.”

The Democrats have been told, and fully understand, that there can be no DACA without the desperately needed WALL at the Southern Border and an END to the horrible Chain Migration & ridiculous Lottery System of Immigration etc. We must protect our Country at all cost!

The “Dreamers”—who, remember, have no right to be here in the first place—should have no say, much less a veto, over the terms under which we grant them what they “demand,” if we choose to do so at all.