The Difference Between How Conservatives, Liberals Define Patriotism 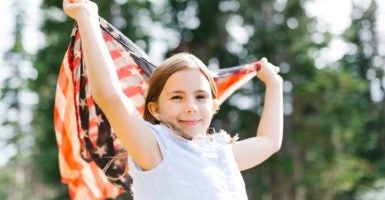 A new poll by the American Culture & Faith Institute uncovered some interesting—and perhaps worrisome—trends when it comes to how Americans think they can properly support their country.

The study found that Americans think patriotism is generally in decline, but we can’t even agree on how to define it, let alone settle on whether it’s generally a good or bad thing.

For instance, believing that America should always come first, conservatives rated military service and protecting the American flag highly on the patriotism scale, while liberals did not.

Liberals largely embraced the idea that using nonviolent civil disobedience to overcome social injustice was a particularly patriotic act, while conservatives tended to be more lukewarm to that.

There was even a divide over which corporations and organizations are considered patriotic. Conservatives favored retailer Hobby Lobby, the National Rifle Association, and Chick-fil-A as patriotic, while liberals clearly leaned toward Starbucks, The New York Times, and Planned Parenthood.

It was perhaps no surprise that the National Football League, which has been plagued all season by controversy over national anthem protests by players, is viewed very differently by the American left and right.

Only 10 percent of conservatives labeled the NFL “very patriotic,” while 30 percent of liberals in the survey said it is.

If anything, the survey’s findings point to some of the most intense friction points in the culture wars.

That there are sharp political divisions in this country is nothing new. From the earliest days of the United States’ existence we have been fighting over what policies are most effective, who is fit to hold power, and what cultural norms will produce the best outcomes.

But if this poll and the general feeling of America in 2017 are any indication, our divisions are a bit deeper than they had been even up until quite recently.

If we can’t agree on what patriotism is, where are we going to find common ground?

Part of this trend undoubtedly flows from the powerful push by America’s elite institutions to move away from creating unity out of an incredibly diverse nation.

Instead, they aim to divide and elevate what are often the smallest distinctions among us.

America in the past was mostly devoted to celebrating its unity and its institutions designed to buttress our national identity. We were committed to forging this identity through our country’s timeless founding ideas, as well as our unique history.

Our culture now almost reverse-engineers that effort—both in rejecting our founding ideas as untrue or outdated, and abandoning our history as in many ways sordid and indefensible.

In place of a kind of unifying and expanding civic nationalism, we are left with the all-too-familiar squabbles over race, class, and gender.

That’s why battles over identity and patriotism are now so ferocious and seem worse than in the past.

A fundamental disagreement over what defines our country’s cornerstone ideas, along with polar opposite conceptions of how best to define identity, are creating unbridgeable fissures in our society—ones that many Americans desperately want to stitch back together.

Some liberals, like professor Mark Lilla at Columbia University, have pleaded for the left to re-embrace the kind of civic unity of the New Deal-era progressivism or face catastrophe.

“We must relearn how to speak to citizens as citizens and to frame our appeals for solidarity—including ones to benefit particular groups—in terms of principles that everyone can affirm,” Lilla said in a Wall Street Journal op-ed column.

He was mostly attacked or ignored by the intellectual left.

So the culture wars, and the wars over identity, will continue as many Americans grasp for leaders who can effectively re-create a concept of unity from the shattered and hostile factions of our republic.

This is almost impossible to do if, at the ground level, Americans have such a vastly different notion of what human nature is or define patriotism in radically different ways.

The American Culture & Faith Institute poll found that only 10 percent of conservatives consider themselves “culture warriors” as opposed to 22 percent of liberals.

If we are committed to reversing our country’s long-term problems, perhaps that needs to change.

Elections serve their purpose, but it’s clear that culture and outlook define our politics more than anything else. That battleground is more important than any temporary electoral victory or defeat.