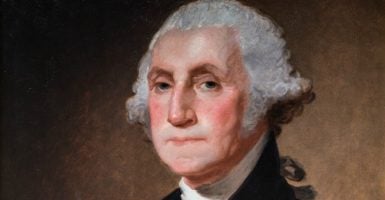 Washington was not a perfect man, but his story reminds us about a time when virtue was valued and extolled. (Photo: Active Museum / Le Pictorium/Newsco)

For most Americans, the 23rd of December has no particular significance.

But an extraordinary event happened on that day in 1783 in Annapolis, Maryland, that stunned the world. Gen. George Washington stood before the Continental Congress in Maryland’s State House and resigned his commission as the commander-in-chief of the Continental Army.

It changed the American republic forever.

Washington had served as commander since 1775. Throughout eight grueling years of war, he led his soldiers through glorious triumphs and crushing losses.

His ragtag group of farmers and shopkeepers was outnumbered by a superior British force. It had been ravaged by disease and starvation.

Several times, it was on the verge of dissolution—after the disastrous defeat in New York City in 1776 and during the brutal winter at Valley Forge. But, with the help of the French military, Washington kept his army together, and he emerged from the war with the devotion of his men.

Washington’s task was to fight an asymmetric war against the more powerful British Empire. In that respect, his task was not unique. History is full of examples of weaker powers fighting, and even defeating, a stronger power.

What made Washington’s mission unique was that he was leading a large-scale republic conceived under a revolutionary principle; namely, that all men were created equal and that governments exist to secure their God-given rights. The Americans were embarking on a new experiment to prove whether this revolutionary belief could become a reality.

For the Americans, it wasn’t just about winning the war. It was also about how they would win.

The Americans were fighting against British tyranny, against what they considered to be a corrupt and centralized system that deprived them of their natural rights and taxing them without their consent.

They were used to governing themselves through Colonial legislatures that checked any centralizing tendencies. But winning wars often requires centralizing authority and raising taxes. And armies, by necessity, often resort to violating the rights of civilians during wartime, such as confiscating property and arresting citizens suspected of treason under military courts.

Washington had the unique challenge of winning the war consistent with revolutionary principles.

Many observers around the world doubted that such a vast republic could be created. Sure, there were republics in Italian city-states or in Dutch provinces, but the American Colonies were themselves the size of entire countries.

How could they be governed without a strongman? How could so many interests be held together without breaking out into anarchy? After all, the Greek and Roman republics both turned into dictatorships, and the vast majority of states around the world were ruled by monarchies.

Even if Washington won the war, surely he would end up having to rule as a dictator. If the American Revolution would not be defeated on the battlefield, it would be defeated in principle.

Washington would be tempted several times by the allure of power. By 1782, some within Washington’s army doubted the Revolution would succeed. Many of the soldiers were suffering because neither the states, nor the Continental Congress was willing to raise the funds necessary to pay them.

The government was just too weak—or simply unwilling—to pay the soldiers. To some Americans, this exposed a defective weakness in the republican government. One man, Col. Lewis Nicola, wrote a letter to Washington in May 1782 suggesting that “strong arguments might be produced for admitting the title of king”—that Washington take monarchical power.

Washington responded forcefully to Nicola, saying he viewed such thoughts “with abhorrence, and reprehend with severity.” He then ordered Nicola “to banish these thoughts from your mind.”

But many in the army continued to think that strong measures should be taken. By March 1783, several officers participated in a plot in army encampments in Newburgh, N.Y., to threaten the Congress, perhaps by refusing to disband after the war ended.

Although Washington sympathized with his men, he knew that disobeying the civilian government would destroy the very principles he had been fighting for. In an emotional speech to his officers, he pleaded with them to “express your utmost horror and detestation of the man who wishes … to overturn the liberties of our country and … open the [floodgates] of civil discord, and deluge our rising empire in blood.”

With that, the plot ended and the tenuous civil control over the military held.

That brings us to that fateful day, Dec. 23, 1783. The Treaty of Paris had been signed, and the United States was all but independent.

Washington arrived at the State House in Annapolis around noon. As he faced Thomas Mifflin, president of the Continental Congress, Washington declared, “I have now the honor of offering my sincere congratulations to Congress and of presenting myself before them to surrender into their hands the trust committed to me, and to claim the indulgence of retiring from the service of my country.”

One witness, James McHenry, wrote, “It was a solemn and affecting spectacle; such [a] one as history does not present. The spectators all wept.” Washington ended “by commending the interests of our dearest country to the protection of Almighty God.” At this, McHenry wrote, “his voice [faltered] and sunk, and the whole house felt his agitations.”

Washington then drew out his commission and handed it over to Mifflin. He then headed home, back to Mount Vernon, arriving there on Christmas Day 1783 as a private citizen. The image of a man surrendering power in a time of kings and emperors stunned the world.

American painter John Trumbull, in Europe at the time, observed that the act “excites the astonishment and admiration of this part of the world.”

“’Tis a conduct so novel, so unconceivable to people, who, far from giving up powers they possess, are willing to convulse the empire to acquire more,” he said.

Upon learning of Washington’s resignation, King George III himself remarked, “If he does that, he will be the greatest man in the world.”

Recent political scandals are only confirming the widespread belief that our politicians, at all levels, abuse the power they have. For many Americans, abuse of power seems to characterize our system, whether it is the institutional mechanisms that ensure the repeated election of career politicians or the revelation of their personal indiscretions.

At a time when faith in our leaders is at an all-time low, it is easy to forget that we were founded largely through the work of a man who, when tempted with absolute power, refused to take it.

It’s no longer in vogue to study the virtues of our statesmen. We live in a cynical age, in which it sells far more books that “uncover” America’s sins, rather than celebrate its greatness. And the “sophistication” of moral ambiguity sells far more than the “simplistic” affirmation of character.

Washington was not a perfect man, but his story reminds us about a time when virtue was valued and extolled. In the words of Daniel Webster, “American has furnished to the world the character of Washington. And if our American institutions had done nothing else, that alone would have entitled them to the respect of mankind.”

In an age crying out for character, it’s time to rediscover the example Washington set for us on Dec. 23, 1783.