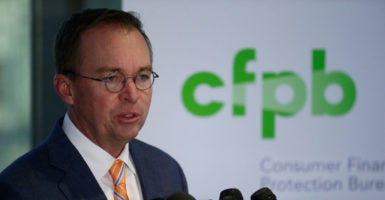 Office of Management and Budget Director Mick Mulvaney was appointed by President Donald Trump to be the acting director of the Consumer Financial Protection Bureau. (Photo: Joshua Roberts /Reuters/Newscom)

The kerfuffle at the Consumer Financial Protection Bureau, or CFPB—an often overlooked consumer watchdog agency created during the Obama administration—is a perfect illustration of how the administrative state has become a menace to constitutional government.

The CFPB re-emerged as a focus of controversy last week when its director, Richard Cordray, stepped down to run for governor in Ohio. President Donald Trump then chose Office of Management and Budget Director Mick Mulvaney, a longtime critic of the CFPB, to replace Cordray temporarily until a new permanent director could be selected.

The problem was that Cordray had picked his own successor, Leandra English, to serve out the rest of his term. He cited a provision of the Dodd-Frank Act that says the deputy director “shall … serve as the acting director in the absence or unavailability of the director” until such time as the Senate confirms a new director.

Mulvaney arrived at the CFPB on Monday and assumed control as acting director. English responded by suing him and the president.

Sen. Elizabeth Warren, D-Mass., who has been one of the CFPB’s key champions, essentially called Trump’s Mulvaney appointment lawless and claimed that the agency has the right to choose its own director under the Dodd-Frank Act.

But this isn’t so. Heritage Foundation’s John Malcolm writes that the Federal Vacancies Reform Act of 1998 ensures that the president “can designate any Senate-confirmed official (which would include Mulvaney) to perform the duties of a vacant federal office in an acting capacity for a statutorily limited period of time.”

Not only that, but preventing the president from determining his own appointment, in this case, would likely violate Article II of the Constitution, which gives the president ultimate authority to hire and fire executive branch officials.

In other words, the president is fully within his rights to choose who serves under him, at least at the agency head level.

This assessment proved to be true on Tuesday, when a federal court threw out English’s case against the administration.

Let’s take a moment to assess the absurdity of this situation.

Not only did the executive branch basically sue itself, but English essentially argued that the CFPB can be self-replicating and can choose its own director, outside of the president’s (or basically anyone’s) control.

For a day it appeared there were essentially two acting CFPB directors, which a Wall Street Journal editorial mockingly compared to the Catholic Church having two popes in 1378 due to internal squabbles.

This should all be eye-opening to those who don’t believe that unaccountable, bureaucratic governance is not an inherent threat to the American constitutional order.

While there are certainly plenty of policy grounds for attacking the CFPB, this situation opens up the larger question of whether we really live in a system of limited government as created by the Founders. English’s presumption of authority, and even the CFPB’s very existence, show how far we’ve drifted from the Founders’ vision of government that is accountable to the people.

The CFPB is operating as if a single agency can be created, dropped into the executive branch, imbued with an extraordinary and sometimes nearly absolute power over the everyday lives of Americans, and be made entirely immune from both the democratic will of the people and their elected leaders.

This isn’t some crazy scenario cooked up by conservatives who don’t like what the CFPB does. One of the CFPB’s chief architects basically admitted this is the case.

“When we wrote the law creating the CFPB … we deliberately tried to give it some protection from the normal political process,” former Rep. Barney Frank, D-Mass., said on CNN.

“Because we knew that fighting the large financial interests on behalf of consumers was going to put you in the battlefield everyday, so we did do deliberately special protections,” Frank said.

As The Federalist’s David Harsanyi wrote, the CFPB was created to “circumvent” the checks and balances of our government. It was then “stacked with partisan ideologues and allowed to conceive its own arbitrary and wide-ranging rules.”

James Madison must be rolling in his grave.

If anything, the CFPB’s overreach and exposure as an anti-democratic, unaccountable, and hyper-partisan appendage of the Democratic Party will hopefully open the eyes of the American people to just what a menace the so-called “fourth branch” of government has become.

The CFPB needs to go, but it is only one of many egregious elements of the modern administrative state.

Perhaps we should start looking at more aggressive solutions that shackle the administrative state through the power of the constitutionally elected branches or through civil service reform, and give the president more leeway to fire bureaucrats, who are currently almost impossible to get rid of.

The administrative state’s abuses are now acutely apparent to the public. Now is the best time to reform it, for the good of our republic.