Tax Cuts Could Boost GDP by Up to 5%, Trump Economic Adviser Says 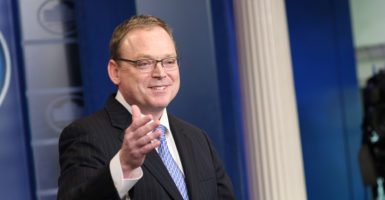 Kevin Hassett says the House’s tax bill could make the U.S. “the most attractive location for investment on earth.” (Photo: Oliver Contreras/Sipa USA/Newscom)

The chairman of the Council of Economic Advisers says if corporate tax cuts are signed into law, the gross domestic product of the United States could increase by 3 percent to 5 percent within 10 years.

Economic Advisers Chairman Kevin Hassett and Rep. Jason Lewis, R-Minn., were part of a conference call hosted Tuesday by the National Taxpayers Union, a nonprofit organization that works for tax reform. The call focused on the Tax Cuts and Jobs Act, which the House passed 227-205 on Nov. 16.

Hassett said the United States has the highest corporate tax rate in the developed world, and companies are basically rewarded for moving to other countries because U.S. taxes are so high.

He said the House’s tax bill could reverse that situation and make the U.S. “the most attractive location for investment on earth.”

Hassett and the Council of Economic Advisers advise President Donald Trump on economic issues. He said the president has two things he wants in a tax bill. The first is that it include tax cuts for middle-class families, and the second is that it simplifies the tax code.

“I think that both the House and the Senate [tax reform] frameworks right now clearly accomplish those goals,” Hassett said. “And that would … give people more take-home pay so that they could spend more on things they need.”

Lewis said the House bill received 227 votes because representatives may have “realized this is the most exciting thing we’ve done since the Tax Reform Act of 1986.” He said markets have already seen some effect of tax reform on the horizon with the GDP increasing, but the danger is now what would happen if tax reform doesn’t pass.

“This is designed to encourage growth and productivity,” Lewis said. “We all know the truck drivers … are more productive with the truck, and so we’ve got to get capital formation so we can increase the productivity of labor. And that way, you’ve got this rising tide, where business makes more money, and labor makes more money.”

Lewis said the House bill is “designed to grow the economy and encourage production.”