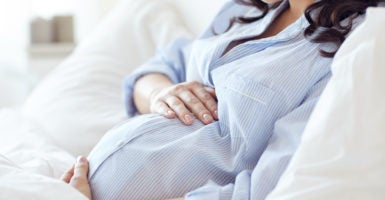 The National Institute of Family and Life Advocates (NIFLA) is a group that promotes life-affirming options to women experiencing an unplanned pregnancy by supporting more than 1,400 pregnancy resource centers across the country, including more than 100 in California alone.

NIFLA v. Becerra will be an incredibly important case for both free speech and the cause of life. Xavier Becerra is California’s state attorney general.

It also forces unlicensed pregnancy centers—even if they do not provide medical services—to post disclosures regarding their nonmedical status.

The law should alarm all Americans who believe in free speech and the freedom to provide compassionate care according to one’s conscience.

The FACT Act was pushed through the Legislature after the Center for Medical Progress released horrifying undercover videos in the summer of 2015.

Rather than investigate the abortion providers and a tissue procurement company shown in the videos discussing the unconscionable sale of baby body parts, California lawmakers instead targeted the Center for Medical Progress and life-affirming pregnancy centers.

That was despite the fact that courts have struck down similar laws that targeted pro-life pregnancy centers in Texas, Maryland, and New York.

California has virtually no restrictions on abortion, such as waiting periods or parental consent requirements. The state is so abortion-friendly that it allows state tax dollars to pay for abortion services and requires employee health insurance plans—even church insurance plans—to cover elective abortions.

On Oct. 30, a California superior court judge ruled that the FACT Act violates the “freedom of mind” protection in the state’s 1949 Declaration of Rights, noting that “compelled speech of a political or cultural nature is not the tool of a free government.”

The Supreme Court will now have the opportunity to affirm that the U.S. Constitution’s First Amendment protects against compelled speech and to recognize that pro-life pregnancy centers shouldn’t have to contradict their mission of providing compassionate alternatives to abortion.

If you can’t force the American Lung Association to promote cigarettes and tell people where to buy them, you certainly can’t force pro-life organizations to direct people to taxpayer-subsidized free or reduced-price abortions.

Regardless of one’s opinion about abortion, the belief that people should be free from government telling them what to say in providing compassionate care to women experiencing a tough pregnancy shouldn’t be controversial.