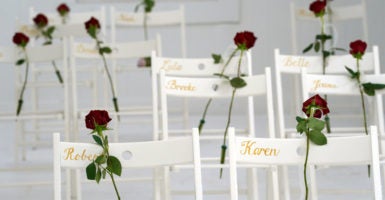 Chairs and roses show where people were found dead at the First Baptist Church of Sutherland Springs, Texas, where 26 people were killed Nov. 5. (Photo: RICK WILKING/REUTERS/Newscom)

Texas is one of 38 states with fetal homicide laws that treat unborn children as individual entities when it comes to criminal law, according to The New York Times. CNN tweeted the victim count Sunday when the church held its first services since the shooting. Several other outlets have stated the official victim tally as 26 people.

A Texas church has held its first service since a gunman opened fire, killing 25 people and an unborn child one week ago https://t.co/GcPUdLK7cz pic.twitter.com/N5dDIm7asZ

The church itself commemorated 26 victims throughout last week, erecting a display of 26 chairs adorned with flowers inside the sanctuary. Gunman Devin Kelley opened fire on churchgoers Nov. 5, killing 26 and wounding 20 others before being engaged and chased away by a National Rifle Association instructor with his own rifle.

The mother and unborn child in question were members of a family who lost eight people during the shooting, including an 18-month-old infant.

Pastor Frank Pomeroy, who lost his own 14-year-old daughter Annabelle in the shooting, delivered a tearful address on Sunday to an audience of several hundred crowded under tents on a local baseball field.

Some among the congregation hoped to hold the service in the original church building, however, many who suffered through the shooting said they would prefer not to return.

Pomeroy’s sermon reportedly centered on the ability of light to overcome darkness.

“It is truly remarkable,” Sen. John Cornyn, R-Texas, told reporters after the service. “What I said when I spoke is that most of this defies our powers of comprehension, but not Pastor Pomeroy. He realized that there is a higher power that is in charge.”

CNN did not respond to a request for comment from The Daily Caller News Foundation in time for publication.