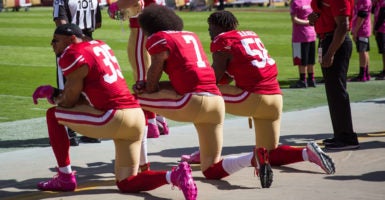 Editorial Note: California’s NAACP has launched a campaign to remove “The Star-Spangled Banner” as America’s national anthem because it is “one of the most racist, pro-slavery, anti-black songs in the American lexicon.” The organization expressed support for NFL player Colin Kaepernick, who launched the recent movement to kneel for the national anthem before sports events. The following is a reprint of an August 2016 Daily Signal article about why the song was beloved by former slave and abolitionist Frederick Douglass.

National Football League player Colin Kaepernick created a stir on Friday when he refused to stand for the national anthem at the start of a preseason game. The San Francisco 49ers quarterback cited the prevalence of racism and oppression in America as the primary reasons he sat during the playing of the song.

The Bay Area football star has been fading over the last few years and he’ll likely be doing a lot of sitting this season—for the national anthem or otherwise. But Kaepernick’s protest has initiated a national debate over patriotism and respect for the American flag.

“The Star-Spangled Banner” was written by Francis Scott Key during the War of 1812; it was officially adopted as the national anthem in 1931 and has been a staple at sports events for more than a century. The song is filled with martial and patriotic references, finishing with a stanza that makes an ode to America as the “land of the free, and the home of the brave.”

To the majority of Americans, “The Star-Spangled Banner” is a moving tribute to what the country represents: freedom, duty, bravery, and commitment to the men and women serving in the armed forces. Clearly, Kaepernick—who makes millions of dollars playing the game he loves—has a different view of what the over two-century-old song represents.

“I am not going to stand up to show pride in a flag for a country that oppresses black people and people of color,” Kaepernick told the NFL media. “To me, this is bigger than football and it would be selfish on my part to look the other way. There are bodies in the street and people getting paid leave and getting away with murder.”

Lambasting “The Star-Spangled Banner” isn’t a new phenomenon. Liberal groups and commentators have tried to get the tune replaced for years, citing racism (Key was a slave owner) and the inherent “militarism” of the song.

An op-ed in The Intercept supported Kaepernick’s actions by dredging up a few stanzas, since removed from the modern rendition of the anthem, that explicitly mention slavery. Columnist Jon Schwarz wrote that the song “literally celebrates the murder of African-Americans.”

Hyperbolic reactions to one of America’s oldest patriotic songs fly in the face of what perhaps a dwindling number of Americans understand. Although the American republic was founded with many imperfections and contradictions—such as the institution of slavery—the timeless principles laid at its foundation have led to more human prosperity for a wider variety of people than any civilization in human history.

Frederick Douglass, an escaped slave who played a critical role in the abolitionist movement in the mid-19th century, had been a frequent critic of American policy and the existence of the “peculiar institution.” However, he believed that the dearly held principles of the Declaration of Independence, and its unequivocal statement that all men are “created equal,” would eventually lead to slavery’s dissolution.

Douglass pulled no punches in criticizing slavery as a massive contradiction in American life, but he understood the evils of the system would be corrected by embracing the country’s origins rather than rejecting them. He encouraged black Americans to sign up and fight for the Union under the American flag during the Civil War, played a crucial role in recruitment efforts, and convinced many former slaves to serve in the military and embrace the United States as the vessel—not the thwarter—of freedom.

“It’s nice to know that we live in a country where sitting down during the anthem won’t land you in jail or worse.” —@RashadJennings

Douglass was known to frequently play “The Star-Spangled Banner” on his violin for his grandchildren in the years after the war. He said in an 1871 speech at Arlington National Cemetery that “if the star-spangled banner floats only over free American citizens in every quarter of the land, and our country has before it a long and glorious career of justice, liberty, and civilization, we are indebted to the unselfish devotion of the noble army.”

For the most part, fans and players in the NFL embrace a similar view of the United States.

Rashad Jennings, a black athlete who plays for the NFL’s New York Giants channeled Douglass in his support for the national anthem and the American flag. He told the New York Daily News, “It’s nice to know that we live in a country where sitting down during the anthem won’t land you in jail or worse.”

Jennings said he was proud to stand for the song and continued to explain why he supports the values contained in its verses:

I figure if it was the intention of our Founding Fathers to keep America a nation of slaves, then it wouldn’t have chosen a song where all four verses end with ‘the land of the free and the home of the brave’ instead of ‘land of the free, home of the slave.’

Jennings’ teammates made a point to stand at attention for the national anthem during a Saturday night game against the New York Jets.

Gallup polls indicate there has been a rapid decline of American pride in their country in recent years—a dangerous slide for a multiethnic republic bound together by principles and institutions rather than national origin.

Kaepernick’s outright attack on what the American flag exemplifies is just the latest sad episode of Americans’ abandonment of the hallmarks of their unity and love of country. This is why it is important for Americans who still believe in what the country was founded on to stand and support the symbols of our way of life.