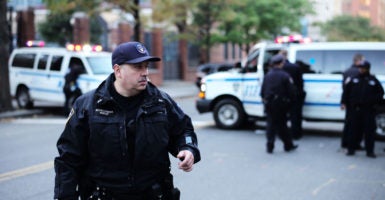 “Shout ‘Allahu akbar,’ because this strikes fear in the hearts of the non-believers.”

Who knew hijacker Mohammed Atta’s parting words, discovered in his journal after the 9/11 attacks, would become a national punchline?

The louder and more frequently jihadists around the globe shriek their signature battle cry, the more fervently multicultural apologists deny its meaning. They’ve transformed the Islamic supremacists’ obvious and explicit call for violence into a bland utterance of peace as indiscernible and nonsensical as “Aloha Snackbar.”

With blood still fresh on the pavement in Manhattan after Tuesday’s outbreak of Allahu akbar-itis that took at least eight innocent lives, Palestinian-American propagandist and Hamas cheerleader Linda Sarsour tweeted:

“Every believing Muslim says Allahu Akbar every day during prayers. We cannot criminalize ‘God is great.'”

Every believing Muslim says Allahu Akbar every day during prayers. We cannot criminalize “God is great.” Prosecute the criminal not a faith.

And confused former Director of National Intelligence James Clapper mused: “It’s hard to comprehend … what moves a human being to do that to another human being.”

Instead of striking fear, “Allahu akbar!” has unleashed collective foolishness.

“Allahu akbar!” screamed Amor Ftouhi just five months ago at Bishop Airport in Flint, Michigan, before stabbing a police officer in the neck.

“It’s too early to say” whether the motive was “terrorism,” law enforcement officials opined. The Associated Press whitewashed Muhammad’s declaration, helpfully obscuring his exact exclamation to the Islam-free translation, “God is great.”

Last month, on the anniversary of the bloodbath, the head-scratchers at the Minneapolis Star-Tribune announced: “One year later, motive of St. Cloud mall attacker remains unclear.”

From the Muslim monsters who decapitated American hostage Nick Berg, to the Fort Dix, New Jersey, attack plotters, to convicted al-Qaida scientist Aafia Siddiqui, to Fort Hood assassin Nidal Malik Hasan, to Times Square bomber Faisal Shahzad, to the machete-wielding murderers who beheaded a London soldier on a busy street, to the truck and stabbing jihadists in Dijon and Nantes, to the Charlie Hebdo-targeting jihadists in Paris, to the ISIS gunmen at Bataclan, to double-stabber Wasil Rafat Farooqui in Roanoke, Virginia, the message of “Allahu akbar” is unmistakable: Kill all infidels.

But to those who pretend that “Islamophobia” and the imagined “backlash” against Muslims are greater threats than the hijackers and head-choppers, “Allahu akbar” is Arabic for “The death and destruction committed in the name of Islam have nothing to do with Islam.”

As Islam scholar and author Robert Spencer told me:

And every suspicious sneeze and sideways glance at oversensitive Muslims is definitively interpreted by the grievance-mongers of the Council on American-Islamic Relations and their ilk as a “hate crime.”

When homicidal warriors for Allah are maiming and murdering non-Muslims according to the plain directives of the Quran—and spelling out their celebration of Islam-inspired violence word (ALLAHU) for word (AKBAR)—it is crazy and delusional to say their actions cannot be understood.

Stop the whitewash. Stop the insanity. Jihad denial is suicidal.