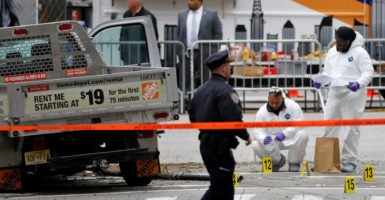 Sayfullo Saipov, an immigrant from Uzbekistan, used a rented Home Depot truck Tuesday to attack bicyclists and pedestrians in Manhattan, killing eight and wounding more than a dozen others, authorities said.

This terrorist attack is the 100th Islamist terror plot or attack against the U.S. homeland since 9/11, a sad and unfortunate milestone to reach. It is the 16th successful attack on U.S. soil after 9/11.

Saipov, who reportedly immigrated legally to the U.S. through the diversity visa in 2010, was planning this attack for weeks, according to police. Saipov rented a Home Depot truck in New Jersey and drove down a bike lane before hitting a school bus.

He emerged from the vehicle with a paintball and pellet gun, reportedly shouting “Allahu akbar,” or “God is great” in Arabic. Police shot him in the abdomen and took him into custody, where he is expected to recover from his wounds.

This attack is the third time a car has been used as a weapon in the U.S., though this is the first time it resulted in the death of innocents. Europe has seen many more of these attacks, with frightening results.

Saipov reportedly left notes in the truck praising the Islamic State. While the investigation into this attack will continue, police believe that he radicalized here in the U.S.

As a result, the problem in this case was not vetting or even the diversity visa, but rather the persistent problem of homegrown terrorism. Eighty-seven of the 100 terror plots and attacks on U.S. soil were entirely or substantially carried out by homegrown terrorists.

This is a serious problem that must be better addressed. Unfortunately, when terror strikes, politicians are quick to reach for their prescribed solutions, even if they do not match the threat.

After the San Bernardino attack, Congress passed and President Barack Obama signed a law restricting the Visa Waiver Program, despite the fact that neither attacker used the program.

When all you have is a hammer, everything looks like a nail.

In the aftermath of this homegrown attack, rather than talking about immigration and vetting, policymakers should focus on how we can stop terrorists once they are already here. The U.S. needs all lawful intelligence and law enforcement tools at its disposal to help detect, investigate, and stop such attackers.

Section 702 of the Foreign Intelligence Surveillance Act is up for reauthorization this fall. Congress should reauthorize this critical tool in its current form to ensure that the U.S. is as ready as possible to stop terrorism.

Of course, there are improvements that can and should be made to vetting, and The Heritage Foundation has long supported doing away with the Diversity Visa Lottery Program, as it does not serve U.S. interests.

Assimilation of immigrants and refugees is another important issue that must be tackled.

But this attack is yet another reminder that the U.S. must do more than just a good job vetting those who enter the U.S. Even more critically, the U.S. must improve its ability to stop homegrown terrorism.

Note: This article has been corrected to accurately reflect the number of terror plots and attacks on U.S. soil to have been planned by homegrown terrorists.