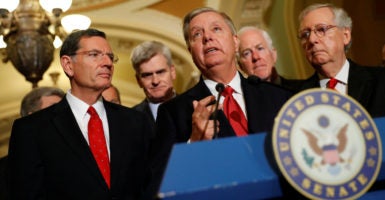 President Donald Trump has said he would sign a ban on abortions more than halfway through pregnancy, but first it needs to reach his desk. And for that to happen, it’ll take the votes of at least seven Democrats in the U.S. Senate.

“Democrats support abortion on demand at any stage of pregnancy and want taxpayers to pay for it,” @RepTrentFranks says.

One leading pro-life group is optimistic, despite the GOP’s narrow 52-48 majority in the upper chamber.

“The 60-vote threshold is a high hurdle and there are many reasons why Democrats in states that Trump won should be very concerned about this legislation,” said Mallory Quigley, spokeswoman for Susan B. Anthony List. “Not only is this the right thing to do morally, it’s also smart politically.”

It takes 60 votes to overcome a Senate filibuster and allow debate on an issue. That means Senate Majority Leader Mitch McConnell would need the support of Democrats.

McConnell, R-Ky., said earlier this month the bill is “supported by virtually all of my members and we expect to have a vote on it at some point.”

The United States is one of only seven countries, including North Korea and China, that allow elective, late-term abortions without restrictions. Proponents say the measure, prohibiting abortions after 20 weeks of pregnancy, would restrict the procedure at the point when some medical experts say the unborn baby can feel pain.

Before the bill passed the House earlier this month on a vote of 237-189, the White House stated that Trump would sign the legislation banning abortion at 20-weeks—except for cases of rape, incest, and to save the life of the mother—if the legislation reached his desk, saying, “The bill, if enacted into law, would help to facilitate the culture of life to which our nation aspires.”

A majority of senators—54 total, including Democrats Bob Casey of Pennsylvania, Joe Donnelly of Indiana, and Joe Manchin of West Virginia—voted to send the bill for a floor debate in 2015. At that time, the GOP had lost the votes of two senators: Susan Collins of Maine and Lisa Murkowski of Alaska. Both remain in the Senate today. If each senator who voted on cloture voted the same way again, there would be 50 Republican votes and three Democratic votes.

Sens. Claire McCaskill, D-Mo., and Heidi Heitkamp, D-N.D., are both voting on a bill popular in their states, Quigley noted, and will feel pressure in a year when both are up for reelection.

A decisive majority of 62.2 percent support legislation to limit abortions after 20 weeks, or five months of pregnancy, while 25.3 percent oppose the ban, according to a McLaughlin & Associates poll commissioned by the pro-life Susan B. Anthony List released this month.

Further, in the 20 states where similar bans passed, one-third of Democratic state legislators voted to support it, Quigley said.

Sen. Lindsey Graham, R-S.C., is the leading sponsor of the Senate bill to ban pain-capable abortions.

“Sen. Graham continues to push for a vote in the Senate on the 20-week legislation,” Graham spokesman Kevin Bishop told The Daily Signal in an email.

NARAL-Pro Choice America President Ilyse Hogue said the Graham bill is “shameful,” saying it would “attack the reproductive rights and health of a small number of women and families who seek abortion after 20 weeks.”

“Mitch McConnell and Donald Trump tried and failed numerous times to rip health care away from millions of Americans and undermine reproductive freedom for women, so it’s no surprise that—desperate for a win—they are now playing politics with women’s lives by introducing this horrific bill,” Hogue said in a statement. “The bill’s 45 co-sponsors should be ashamed of themselves.”

The sponsor of the House-passed bill, Rep. Trent Franks, R-Ariz., predicted the legislation would at least get 55 or 56 votes for final passage if it could overcome a Senate Democratic filibuster.

“The notion that the Democrats would filibuster this bill is a disgrace,” Franks said. “The public overwhelmingly oppose late-term abortions where the baby can feel pain, and could live a normal live outside the womb. We used to have moderate Democrats. Now Democrats support abortion on demand at any stage of pregnancy and want taxpayers to pay for it.”

The Trump administration strongly backs the legislation, but White House press secretary Sarah Huckabee Sanders wasn’t aware if the White House was putting pressure on the Senate for passage.

Other pro-life groups are taking a cautious outlook.

“Almost the whole Republican caucus are co-sponsoring it, but we don’t see it reaching the 60-vote threshold [in the Senate],” Jennifer Popik, director of federal legislation for the National Right to Life Committee, told The Daily Signal. “Unfortunately, despite broad public support, including among some Democrats, we don’t anticipate this going to the president’s desk.”

At a minimum though, senators will have to go on the record about their position on a very unpopular procedure.

“It could pick up momentum and maybe not this time, but in the next Senate session, we could open up debate,” Popik said.

Congress has moved slowly in passing such legislation, compared, Melanie Israel, a research associate for the DeVos Center for Religion and Civil Society at The Heritage Foundation, told The Daily Signal.

“Congress should pass the Pain-Capable Unborn Child Protection Act to protect women and unborn children from gruesome late-term abortions performed after 20 weeks,” Israel told The Daily Signal. “At the state level, over a dozen states across the country have enacted 20-week bills. Congress is overdue to pass the bill at the federal level.”