Alaskans Want More Drilling. Trump and Congress Are Working to Make It Happen. 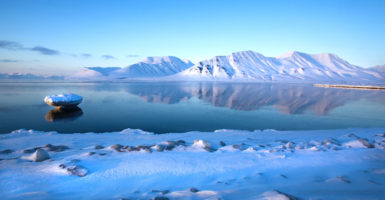 The Trump administration is attempting to do what past administrations have either failed to do or blocked: open up part of the Arctic National Wildlife Refuge for oil and gas drilling.

Last month, The New York Times obtained an internal memo from the Interior Department, which proposed the lifting of restrictions on exploratory seismic studies in the Arctic National Wildlife Refuge. The agency was directed to provide an environmental assessment and a rule allowing for new exploration plans.

The federal government established the wildlife refuge in 1960. It first consisted of 8.9 million acres, but today accounts for 19.3 million acres.

Some 10.4 billion barrels of oil are believed to be in the 1.5 million acres known as the “1002 area,” but the last time the U.S. Geological Survey studied the area was in 1998. Drilling would likely only occur in some 2,000 acres, representing just 0.01 percent of the total land mass of the refuge.

It is noteworthy that those in Alaska who would be directly impacted by the drilling recognize its value.

Mayor Harry Brower Jr., who represents a borough in the wildlife refuge, said, “North Slope Borough residents recognize the importance of oil and gas to our local economy and the ability of our borough and city governments to provide public services.”

The native Iñupiat people who live within the refuge also welcome the drilling. Matthew Rexford, president of the Kaktovik Iñupiat Corp., a village corporation established following the Alaska Native Claims Act of 1971, wrote:

As Iñupiat, we stand to be inarguably the most affected by oil and gas activity in the Arctic. Therefore, we have the greatest stake in seeing that any and all development is done in a manner that keeps our land and subsistence resources safe. We know it can be done, because it’s already being done. Now is the time to open [Arctic National Wildlife Refuge] to drilling.

The Voice of the Arctic Iñupiat, a 21-member nonprofit corporation, unanimously voted to pass a resolution backing “safe and reasonable development” in the wildlife refuge.

Moreover, the results of a 2017 survey of Kaktovik, a town in the 1002 area, show that 71 percent of those surveyed think oil and gas has the most significant economic impact on their community. Eighty-six percent view the offshore oil and gas industry as favorable.

Nevertheless, opponents of drilling argue that there is no need to open the wildlife refuge because oil prices are low. the problem with this argument is that no one knows what the price of oil will be years, let alone decades, from now, and drilling is a multiyear endeavor.

This objection is likely just a red herring from their real desire to block any natural resource development. To environmentalists, there is never a good time to open up the wildlife refuge to drilling.

Opponents also worry that opening up the reserve will come with enormous environmental risks in a “crown jewel” of wilderness. But in reality, the 1002 area has no trees, deep-water lakes, or maintain peaks at risk.

Further, fracking technology has made oil recovery more efficient, and it would only take place in a small portion of the region.

Environmental policy should be tailored to specific sites and situations, and should be decided by those closest to the people who have the most to gain or lose by those decisions.

In this case, Alaskans should decide, and they should not have to consult hundreds of members of Congress to make these decisions.

But until they have control, the future of the Arctic National Wildlife Reserve rests in the hands of Congress and President Donald Trump.