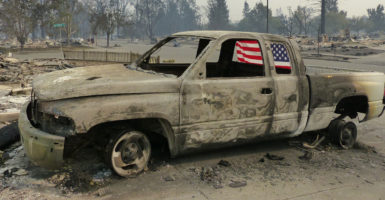 The city of Santa Rosa has been hit hard by the fires that have ravaged Northern California. (Photo: Barbara Munker/dpa/picture-alliance/Newscom)

Massive wildfires continue to rage out of control in Northern California, causing historic loss of life and billions of dollars in damage.

The images coming out of California towns, which look like bombed-out cities from World War II, are a sobering reminder of man’s occasional futility in the face of nature unleashed.

>>> 23 Photos of the Wildfires Burning Through California

Stopping these huge blazes is, of course, a priority. The firefighters who have been battling these infernos have at times done a miraculous job under extremely difficult circumstances.

However, policymakers should also look at ways to curtail the long-term trend of growing numbers of major wildfires. While some argue that climate change is to blame for the uptick in fires, it’s also worth grappling with the drastic alterations in forest management that have occurred over the last four decades.

Many have argued that this is driving the surge in huge fires.

As a Reason Foundation study noted, the U.S. Forest Service, which is tasked with managing public wildland, once had success in minimizing widespread fires in the early 20th century.

But many of these successful methods were abandoned in large part because of efforts by environmental activists.

Spending on the Forest Service has risen drastically, but these additional resources have been misused and haven’t solved the underlying issues.

In a May congressional hearing, Rep. Tom McClintock, R-Calif., said, “Forty-five years ago, we began imposing laws that have made the management of our forests all but impossible.”

He went on to say that federal authorities have done a poor job of implementing methods to reduce the number of deadly fires, and that this has been devastating for America’s wildlands.

“Time and again, we see vivid boundaries between the young, healthy, growing forests managed by state, local, and private landholders, and the choked, dying, or burned federal forests,” McClintock said. “The laws of the past 45 years have not only failed to protect the forest environment—they have done immeasurable harm to our forests.”

In a recent House address, McClintock pinned the blame of poor forest management on bad 1970s laws, like the National Environmental Policy Act and the Endangered Species Act. He said these laws “have resulted in endlessly time-consuming and cost-prohibitive restrictions and requirements that have made the scientific management of our forests virtually impossible.”

Interior Secretary Ryan Zinke has promoted a change to forest management policies, calling for a more aggressive approach to reduce the excess vegetation that has made the fires worse.

Congress is also moving to address the problem.

Members of the Western Caucus have proposed legislation to dramatically change the way forests are managed. If passed, this bill would give power back to local authorities and allow for more aggressive forest thinning without subjecting them to the most onerous of environmental reviews.

While state and federal governments can take measures to enhance forest and wilderness management, private management can also get involved to improve conditions.

One idea is to adopt a policy popularized by the school choice movement: create charter forests that are publicly owned, but privately managed. This would allow forest management to move away from top-down, bureaucratic control to a decentralized and varied system that may better conform with local realities.

As professor Robert H. Nelson wrote for The Wall Street Journal, the charter forest “would be exempt from current requirements for public land-use planning and the writing of environmental impact statements. These requirements long ago ceased to perform their ostensible function of improving public land decision making.”

Similar privatizing efforts have succeeded in the past.

No measure can truly prevent all fires, but reasonable steps can be taken to reduce the incidence of huge blazes like the ones currently engulfing California.

It’s time for lawmakers to redouble their efforts to protect American lives and property from nature’s most devastating ravages.