Rolling Back Obama EPA Rule Could Save $33 Billion 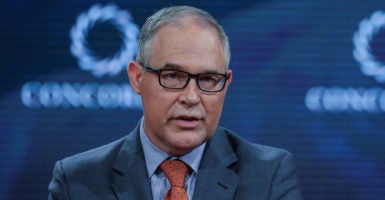 Scott Pruitt, administrator of the Environmental Protection Agency, answers a question during the Concordia Summit on Sept. 19 in New York. (Photo: Jeenah Moon/Reuters/Newscom)

Reversing an Obama administration energy regulation will save energy companies $33 billion in compliance costs through 2030—costs that would have otherwise been borne by consumers, senior Trump administration officials said in providing details about scrapping the plan.

The Environmental Protection Agency on Tuesday proposed to repeal the Clean Power Plan, placing the proposed repeal in the Federal Register and giving stakeholders 60 days to submit public comment.

The Obama administration’s Clean Power Plan aimed to reduce carbon emissions by one-third by 2030. However, it ran into multiple lawsuits from more than 150 entities, including 27 states, 24 trade associations, 37 rural electric cooperatives, and three labor unions, according to the EPA. On top of that, 34 senators and 171 House members filed an amicus briefing arguing the Clean Power Plan was illegal. On Feb. 9, 2016, the Supreme Court halted the implementation of the program.

The EPA will review what the next step after the repeal of the rule is and if any further regulation is warranted, according to a summary from the agency. The agency states that the Clean Air Act is a source for authority but is also carefully crafted to limit what the agency does.

On March 28, President Donald Trump signed an executive order to establish a national policy on energy independence. The executive order was to promote the developing U.S. energy sources and reduce regulation. That day, EPA Administrator Scott Pruitt signed four Federal Register notices in response to the executive order that included a review of the Clean Power Plan.

On Monday, Pruitt was in coal country in Hazard, Kentucky to announce the plan to roll back the regulation, where he reportedly said, “The war on coal is over. … I’ll be signing a proposed rule to withdraw the so-called Clean Power Plan of the past administration and thus begin the effort to withdraw that rule.”

“Pruitt is trying to gut the EPA’s Supreme Court-confirmed power to regulate dangerous climate pollution so these same companies can avoid accountability for fueling climate chaos,” Mitchell said. “Fortunately, utilities, cities, Fortune 500 companies, and people around the world are all moving towards renewable energy despite Scott Pruitt’s cynical attempt to delay the inevitable.”