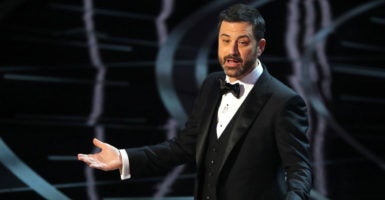 With Jon Stewart off the air, it seems the left has found a new progressive comedian it can look to for all the big cultural and public policy debates.

After spending September lobbying on air to keep Obamacare, Jimmy Kimmel went on a rant this week on the “Jimmy Kimmel Live!” TV show about the horrific mass shooting that took place in Las Vegas on Sunday. He made a fairly sweeping attack on widespread gun ownership in America and generally suggested that gun control will fix the problem of gun violence.

There is more we can do, and we need to do it. Love to my hometown. #VegasStrong pic.twitter.com/eOQPUCYziY

Statistics show gun control has little impact on decreasing crime and violence, but Kimmel chose to make his case by making jokes, saying “our forefathers wanted us to have AK-47s is the argument, I assume.”

Kimmel is suggesting that the Founders didn’t understand modern technology, and therefore, arguments about why they set out to defend gun rights in the Bill of Rights don’t apply to today.

That is, of course, a straw man argument.

The Founders did not design the Constitution so that it would only be applicable in their own day. The rights they aimed to protect weren’t tied to a specific time or era, but were timeless and universal.

A ‘Primary Law of Nature’

The Second Amendment was not made up out of thin air. The Founders saw it as a legal expression of a citizen’s natural right to self-defense and preservation, and his ability to resist governmental tyranny.

William Blackstone, a legal theorist who had an enormous influence on the Founders, wrote, “Self-defense … as it is justly called the primary law of nature, so it is not, neither can it be in fact, taken away by the law of society.”

Self-defense is among the “God-given rights” that the Declaration of Independence refers to.

These principles are grounded in Western tradition and are at the cornerstone of our civilization—though they are increasingly dismissed as radical and “fundamentalist” by some in the modern media.

If one believes “rights” come from government, not God or nature, it is easy to see why those like Kimmel believe this ever-evolving set of rights simply needs to be legally updated from time to time.

But this is not how the Founders thought, nor is it what they conceived when they decided to protect the blessings of liberty for themselves or their posterity.

While the right to self-defense and the Second Amendment were eroded in the 20th century, new scholarship has recovered the Founders’ ideas. As George Mason University professor Nelson Lund wrote for The Heritage Foundation:

… Commentators sought to establish that the Constitution does protect an individual right to have weapons for self-defense, including defense against criminal violence that the government cannot or will not prevent.

This logic of self-defense has been at the heart of recent Supreme Court rulings that have sided with the right to bear arms.

>>> Read The Heritage Foundation Report: The Second Amendment and the Inalienable Right to Self-Defense

Though many Americans believe these rights are inviolable, the challenge still remains: Should we ignore the Founders, or perhaps even the idea of natural rights, simply because technology has changed so radically?

The Founders and AK-47s

In Federalist 46, James Madison (not Alexander Hamilton, as this post first said) explained why the right to bear arms was so fundamental to preserving American liberty.

This is what the Founders desperately wanted to avoid.

An armed populace, the “militia” that the Second Amendment refers to, is an additional check on the power of government—a last resort for those who may be oppressed.

Madison made this argument in an era when the kind of weaponry available to citizens was in even closer parity to what was available to militaries and governments.

The musket was the principal weapon of armed conflict in the 18th century. An American leaving his home with a musket was on par with a member of the Continental Line. Not so with an American who possesses any number of AR-15s or AK-47s. The contemporary gap between civilians and the military is vast and growing.

The advancement of weapon technology would not likely have surprised the Founders, who after all lived in an era of remarkable innovation. What would shock them is that government would have become so powerful and capable of depriving people of their liberty in the blink of an eye.

This is exactly what gun rights advocates fear and what they believe is behind the gun control movement.

Neither Safe, Nor Free

The facts of the Las Vegas massacre are still muddy, but it’s clear the shooter was not stopped by current gun laws heavily restricting automatic weapons—which he may have used—nor would proposed “common sense” laws like cracking down on suppressors have made a difference.

While gun control activists jump on every shooting incident to push their agenda, the facts and opinions of the American people remain hardened against them.

When the American people, for instance, heard former President Barack Obama praise Australia’s gun control laws, this led to the logical conclusion that the real end goal is confiscation.

After a mass shooting in 1996, Australia implemented widespread gun control and confiscation measures. The number of guns taken in these mandatory “buyback” programs is estimated to be around 650,000 to a million.

To create a similar policy to Australia, the U.S. government would have to pluck over 100 million firearms from American citizens.

In some ways, Australia-style confiscation is the only logical place for the gun control argument to end if the idea is to make sure nobody ever dies from firearm usage. That goal is folly.

It must be noted that in order to sweep in and confiscate weapons en masse, the government would be taking on precisely the kind of power the Founders feared and wanted to protect themselves and future generations against.

Statistics on guns and gun crime have demonstrated very little to show for gun control laws. And Americans are simply unwilling to surrender their God-given rights based on dubious claims that the government can make us perfectly safe from evil-doers.

In the end, large numbers of Americans believe increasingly stringent gun laws will make us neither safe nor free.

So while those on the left, like Kimmel, make passionate pleas for this country to “do something,” like pass gun control to stop violence, few besides the already-converted are going to buy it.