‘Joined in Shock and Grief’: Trump Calls for Unity After Las Vegas Massacre 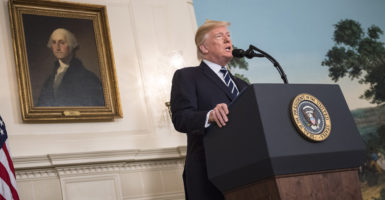 "In moments of tragedy and horror, America comes together as one," President Donald Trump says Monday morning of the mass shooting at an outdoor concert Sunday night in Las Vegas. (Photo: Kevin Dietsch/UPI/Newscom)

President Donald Trump, saying the nation is “joined together today in sadness, shock, and grief,” announced he will travel Wednesday to Las Vegas to visit the families of at least 58 people killed in the Sunday night shooting there, as well as survivors and first responders.

“We know God lives in the hearts of those who grieve,” @POTUS says.

In White House remarks lasting just over five minutes Monday morning, Trump called the shooting “an act of pure evil,” asked for unity, and praised police who quickly converged on the gunman’s nest in a 32nd-floor hotel room.

“I want to thank the Las Vegas Metropolitan Police Department and all of the first responders for their courageous efforts and for helping to save the lives of so many,” Trump said.

“The speed with which they acted is miraculous, and prevented further loss of life,” he said. “To have found the shooter so quickly after the first shots were fired is something for which we will always be thankful and grateful. It shows what true professionalism is all about.”

The president ordered flags at government buildings to be flown at half-staff in honor of those killed and wounded.

Scripture teaches us the Lord is close to the broken-hearted and saves those who are crushed in spirit. We seek comfort in those words for we know God lives in the hearts of those who grieve. To the wounded who are now recovering in hospitals, we are praying for your full and speedy recovery.

The gunman, identified by police as Stephen Paddock, 64, killed at least 58 and wounded more than 525 attending an outdoor country music concert on the Las Vegas Strip before turning a gun on himself.

Police said Paddock fired from his room on the 32nd floor of the Mandalay Bay Resort and Casino, which is across the street. They said he killed himself as officers entered his room, the Associated Press reported.

AP reported that Aaron Rouse, FBI agent in charge in Las Vegas, said investigators saw no immediate evidence connecting Paddock to an international terror group, despite a claim of responsibility from the Islamic State, or ISIS.

The number of deaths—updated from 50 to 58 about 11:30 a.m. EST—surpasses the carnage from the Orlando nightclub shooting in June 2016, where 49 people were killed. The number of wounded in Las Vegas rose from about 400.

The president added: “Though we feel such great anger at the senseless murder of our fellow citizens, it is our love that defines us today and always will, forever.”

Ken McIntyre contributed to this report, which was updated to put the initial number of those killed by the gunman, not including himself, at 58.