Here’s the Truth About Gun Control and Crime 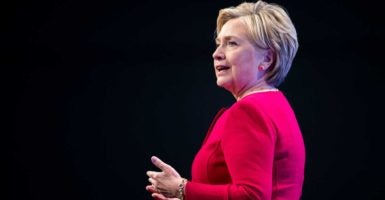 “The crowd fled at the sound of gunshots. Imagine the deaths if the shooter had a silencer, which the NRA wants to make easier to get,” Hillary Clinton tweeted.

“Our grief isn’t enough. We can and must put politics aside, stand up to the NRA, and work together to try to stop this from happening again,” she added.

And she wasn’t the only one to quickly promote gun control in light of the terrible news about the shooting, which has left at least 58 dead and another 500 wounded.

While the facts are still entirely unsettled as of this writing, that didn’t stop gun control activists from immediately jumping to conclusions or answers on how to fix everything.

And while too little is known about the Las Vegas shooting to make judgments about what could or could not have prevented it, the reality is that gun ownership does not lead to more crime in the United States.

Yet, in the chaotic wake of the horrific mass shooting, proponents of gun control quickly turned the event to fit their agenda.

For instance, Sen. Chris Murphy, D-Conn., accused those who didn’t act on shootings of “cowardice.”

To my colleagues: your cowardice to act cannot be whitewashed by thoughts and prayers.

None of this ends unless we do something to stop it.

Other lawmakers on the left weighed in as well:

It is long past time for Congress to take action on gun safety to save innocent lives.

Tragedies like Las Vegas have happened too many times. We need to have the conversation about how to stop gun violence. We need it NOW.

And there were numerous other hot takes from nonelected politicos and celebrities that veered into various levels of blaming gun rights supporters for allowing events like Las Vegas to happen.

Shooter is a white, 60+ male, armed to the teeth thanks to the NRA. Not a muslim terrorist or undocumented inmigrant. Who will Trump blame? pic.twitter.com/Er08TypiGK

The @NRA was one of the largest donors to @realDonaldTrump's campaign. They expect to get what they paid for. This admin will not do anything to prevent further violence. #LasVegas

Prayers are important but @SpeakerRyan @realDonaldTrump blood is on the hands of those who have power to legislate. #GunControl act quickly. https://t.co/bXZQ7enuEp

Durn tootin’, great shootin’. Cool dude sertin’ he’s 2nd Mendment rahts. Hell yeah!
Every country has its psychopaths. In US they have guns

And all of this before even the most basic facts have been ascertained. The Associated Press reported that ISIS claimed responsibility for the shooting, but the FBI says there is no connection. The details of the case are simply a confusing mess and it is difficult to ascertain the shooter’s motives, how he acquired the firearm(s), or even what firearm(s) he used to conduct the attack.

While it is unwise to draw too many conclusions about what happened in Las Vegas, in the face of the relentless assault on gun rights and misinformation it is important to note some false narratives that have been spread in the last 24 hours.

Take Clinton’s claim about silencers. She was immediately denounced for this statement as being “ignorant” of how suppressors work. Even a Washington Post reporter wrote that the debate over silencers “isn’t really relevant” to what happened in Las Vegas.

And both The Washington Post’s fact-checker Glenn Kessler and conservative pundit Dana Loesch pushed back on Clinton’s claim:

Actually, even with "a silencer," it's pretty loud. An AR-15 rifle would have a noise equivalent to a jack hammer. https://t.co/rL1YFuAB5b https://t.co/YE9smBZqGG

Suppressors only reduce by a few decibels, still same decibel level as a jackhammer. https://t.co/aj0AvJMZwv

A study released earlier this year by the Bureau of Alcohol, Tobacco, Firearms, and Explosives found that while there were 1.3 million registered suppressors in the country last year, there were only 44 suppressor-related crimes recommended for prosecution.

The details about the weapons the shooter used are still not clear, but some have called for a ban on automatic weapons—basically machine guns—on top of other gun control measures.

However, federal laws dating back to the 1930s already on the books strictly regulate the sale and purchase of these kinds of firearms.

Sean Davis at The Federalist did an excellent job of explaining how tightly controlled automatic weapon sales are in the United States:

There is also a tax on these items—and they’re not cheap since only weapons produced before 1986 are allowed to be sold.

Of course, with the right tools and skills, it is still possible to create a fully automatic weapon, which some experts say may have been what the Las Vegas shooter did to carry out his murders.

Nevertheless, these weapons are incredibly difficult to obtain.

The events that took place in Las Vegas on Sunday night were an atrocity. But it must be noted that wicked individuals have found ways to conduct mass murder and terrorism through a variety of means both legal and illegal: guns, knives, acid, planes, and trucks.

As numerous studies have shown, gun ownership is not necessarily connected to crime rates, and in fact may make crime go down. A 2016 report from the National Rifle Association Institute for Legislative Action noted that:

The fact is, a majority of Americans just don’t see gun control as the answer to crime, violence, and terrorism.

As Gov. Matt Bevin, R-Ky., put it on Twitter, we live in a fallen world and ultimately can’t regulate evil.

Sometimes, in the face of horror, there are no policies or prescriptions that apply besides the courage and sacrifice of those who are good.