Global Trade Volume Is Up, No Thanks to Protectionism 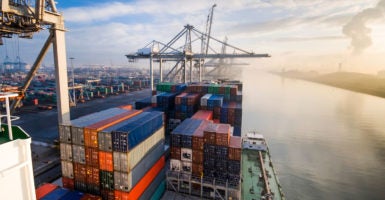 In a sign of improving economic health around the world, the World Trade Organization has strongly upgraded its forecast for the 2017 growth in world trade volume.

The World Trade Organization previously estimated trade expansion in 2017 to be 2.4 percent, but now looks to hit 3.6 percent growth for the year.

This is welcome news. A rise in trade volumes are a sign that more people around the world are entering mutually beneficial transactions with economically free counterparties in other countries.

In such transactions, both trade partners win because free trade is based on mutual advantage.

Roberto Azevêdo, director-general of the World Trade Organization, cautions that a few things could derail the recovery in world trade.

Azevêdo warns that protectionist rhetoric from world leaders could lead to trade restrictive actions. He says the current expansion of trade is more likely to continue “if countries continue to resist the temptations of protectionism and work together with their partners in the multilateral system to ensure that gains from trade are both large and widely shared.”

As The Heritage Foundation’s annual Index of Economic Freedom has documented since 1995, the world’s most prosperous countries are those that are open to international trade and investment. America should pursue a trade policy that generates new jobs and economic dynamism for Americans by expanding economic freedom across the globe.

In other words, the end goal of the U.S. trade policy agenda should be the removal of existing government restrictions on the freedom of Americans to trade, except those that may be required by health, safety, or national security.

Such a policy goal is essentially in line with the Trump administration’s ongoing deregulatory and tax reform agenda.

Of course, some enterprises do not want existing trade restrictions removed. They enjoy monopoly power in the U.S. market because Washington’s swamp of special interests has restricted their competitors through various taxes or quotas. Such firms are not going to want to lose their privileged position.

Yet guaranteeing these companies’ survival through government support—the essence of protectionism—is neither a suitable nor responsible policy choice. Countries that have gone the route of protectionism, which propels favoritism, find themselves trapped by sluggish growth, technological stagnation, declining productivity, and the erosion of prosperity.

Instead of a protected industry relying on Washington’s misguided paternalism to protect them, they should improve their products and respond to market demands.

Protectionist taxes also hurt American businesses that use imports to make their final products. Why must these companies pay above-market prices (or go out of business if they can’t afford to pay inflated prices) so that some other industry can curry special favors from Washington?

The government should not pick winners and losers by artificially making some goods more expensive through protectionism. Doing so takes away the economic freedom of hardworking Americans.

Politicians should not curtail the recent expansion in global trade by attempting to guide trade into areas it does not naturally flow.

More free trade, not less, is what America needs in order to prosper. Fundamentally, free trade is about rejecting favoritism and expanding economic opportunity for all.

It is essential that policymakers separate hype from fact and assess existing trade deals and initiatives objectively. Armed with the facts, they can then help to promote dynamic economic growth and lasting prosperity in the U.S.