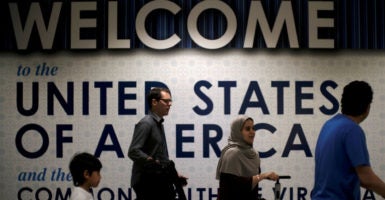 President Donald Trump’s new restrictions on travel from certain nations adapt to the latest threats and affect countries without Muslim majorities, but face legal challenges similar to previous ones.

On Sunday, Trump issued a presidential proclamation on what he calls “extreme vetting” that builds on his March 6 executive order that barred immigration from six countries. And late Monday, the Supreme Court canceled arguments based on the older policy.

The new travel ban adds North Korea, Venezuela, and Chad to the list and drops Sudan, for a total of eight affected countries. Remaining under the ban are Iran, Libya, Somalia, Syria, and Yemen.

Here, in three pieces, are some key differences in the new executive action and a look at what’s ahead on extreme vetting.

Trump’s executive action will last for 180 days. By that point, the Department of Homeland Security, Justice Department, and Office of the Director of National Intelligence are required to submit a new report suggesting adjustments if necessary.

The previous ban blocked entry from the listed nations into the United States for 90 days and prevented refugees from there for 120 days. Because of court challenges, the 90-day ban resulting from the March order did not go into effect until late June.

Foreign governments will have to cooperate with the U.S. government to identify suspected terrorists and share identity-related information, according to a White House press release.

The order Trump signed in March suspended entry into the United States by foreign nationals of six countries of concern; the new one increases that number to eight nations.

The order required the Department of Homeland Security to review other nations’ information-sharing practices regarding nationals traveling to the U.S., and to recommend improvements to the president. Officials dropped Sudan from the list because of improved information sharing with the United States.

“The first policy was very much a pre-emptive action based on the threat,” James Jay Carafano, a vice president in charge of national security issues at The Heritage Foundation, told The Daily Signal. “This is their own policy based on their own assessment, not inherited information from the previous administration.”

“The review of this should be dynamic because the threat is dynamic,” Carafano said.

The Supreme Court was scheduled to hear oral arguments for and against the travel ban on Oct. 10. On Monday afternoon, however, the court announced the arguments would not be heard that day and asked parties involved in the challenge to submit new briefs.

“President Trump campaigned on excluding Muslims, and began his presidency banning Muslims from the U.S. Now he is expanding the ban to other immigrant communities that he expressed deep-seated prejudice towards,” Debbie Almontaser, president of the Muslim Community Network and board member of the Yemeni American Merchants Association, said in a statement Monday.

“His bias, bigotry, and discrimination [against] communities of color continue to seep into his policies in violation of our Constitution, and have resulted in disrespecting our country’s history, laws, and values,” Almontaser said.

Anthony Romero, executive director of the American Civil Liberties Union, which challenged the previous executive order on the travel ban, said nothing changes with the new policy.

“The fact that Trump has added North Korea—with few visitors to the U.S.—and a few government officials from Venezuela doesn’t obfuscate the real fact that the administration’s order is still a Muslim ban,” Romero said in a formal statement Sunday. “President Trump’s original sin of targeting Muslims cannot be cured by throwing other countries onto his enemies list.”

However, the addition of Venezuela and North Korea could make a difference, since they are not Muslim-majority countries, said John Malcolm, a lawyer who heads the Institute for Constitutional Government at The Heritage Foundation.

“This could be another reason the Supreme Court might kick the case back to the lower courts for reflection,” Malcolm told The Daily Signal.

But, the addition of new countries isn’t the only reason the policy will have a stronger standing in court, Malcolm said. He said he believes the odds are “sharply more in favor” of reversing lower court orders against the travel ban.

“There is more detail to the process used to come up with this list that was not outlined in the previous order,” Malcolm said.

“I believe if the case reaches the courts on the merits, the president will be in good shape,” he said.

This report has been updated to reflect the Supreme Court’s decision to ask for new legal briefs.