No, the Electoral College Is Not a ‘National Security Threat’ 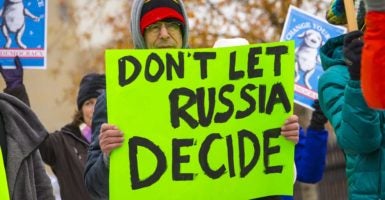 Following Hillary Clinton’s electoral defeat and Donald Trump’s ascension to the White House, numerous progressives came out of the woodwork to call for the end of the Electoral College in favor of a national popular vote.

While most of the arguments against our over two-century-old system revolve around it not being purely democratic and being weighted toward smaller states, a recent commentary in Politico has stretched that attack to an absurd limit.

Matthew Olsen, a member of the National Security Agency under President Barack Obama, and Benjamin Haas, a West Point graduate and current student at Stanford University, argued that the Electoral College is antiquated and even dangerous because hostile foreign powers can micro-target populations in certain states to tip the election.

Further, the writers argue that the Founders couldn’t possibly have imagined how new technology, like Facebook, could perpetuate false ideas and that foreign powers would disseminate lies.

This leads them to suggest moving to a national popular vote, which they suggest is somehow a safer way to elect presidents.

Their arguments demonstrate both an amazing amount of hubris in assuming they, our nouveau elite, know better than the Founders, and stunning ignorance in thinking the creators of the Constitution had no experience with “fake news.”

There is a lot to untangle from what seems to be a rather absurd and roundabout excuse for Clinton’s defeat, but it’s worth debunking.

Why We Have an Electoral College

The Electoral College was not just a quirky idea the Framers cobbled together without serious consideration for how it would be used by future generations.

The office of the presidency and the method by which our leaders would be selected are perhaps the most explicit aspects of the Constitution, and they were the products of ferocious debate.

The Founders wanted to create a system by which the country’s only true national leader could be chosen by a process that would contain vital elements of both federalism—or state power—and democracy.

Also, given their vast experience of dealing with foreign powers that wanted to see America fail, and local manipulators who wanted to tip elections, the Framers of the Constitution created a carefully calibrated process that would help create a stable, legitimate system to serve a free people.

The product was a brilliant process, born of design and compromise, that has created over two centuries of stable and virtually uncontested elections.

This accomplishment often goes unacknowledged. But as governments rose and fell through the centuries, ours has steamed along. We have, in part, the Electoral College to thank for this political miracle.

As the Politico writers noted, Alexander Hamilton defended the Electoral College in Federalist No. 68.

Hamilton believed the indirect method of “electors” choosing a president after the states had voted in their separate capacities would protect America from foreign intrigues that would seek to enable “Manchurian” candidates to become president.

Hamilton and his colleagues never could have envisioned a year like 2016, when an enemy state—Russia—was able to manipulate America’s election process with stunning effectiveness.

The late 18th and early 19th centuries were rife with foreign powers meddling in American elections. It was in some ways much easier for the superpowers of Europe to use propaganda in fighting proxy wars to tip the scales of our elections one way or another.

For example, Citizen Edmond Genet, a French diplomat to the United States, tried to tip the American population toward supporting his country in its wars against Great Britain in the 1790s.

He and other French radicals engaged in a massive campaign to turn Americans against President George Washington’s administration to get a pro-French candidate elected. This more or less failed, and Washington served two terms without serious challenge.

The fact is, there is simply no way of entirely avoiding outside influence and the flow of information in a free country.

It is something America has perpetually dealt with, and mostly overcome.

The argument that “fake news” is simply a modern phenomenon that the Founders couldn’t have anticipated is absurd.

That fraudulent stories and ideas could be rapidly perpetuated and could change people’s minds was widely understood and acknowledged by the men who created our form of government.

>>> The Founders Anticipated ‘Fake News.’ Here’s What They Did About It.

At the Constitutional Convention, curmudgeonly Founder Elbridge Gerry said the following of fake news and democracy:

The people do not want [lack] virtue, but are the dupes of pretended patriots. In Massachusetts it had been fully confirmed by experience, that they are daily misled into the most baneful measures and opinions, by the false reports circulated by designing men, and which no one on the spot can refute.

Campaigns then and thereafter were filled with false reports, unsubstantiated rumors, absurd accusations, and a whole lot of lies.

What was the Founders’ solution to this problem? Create a system that fostered a culture of free speech and debate while mitigating the impact of pure democracy.

The answer is not a national popular vote or government censors determining what is real news and what is fake. It’s in supporting the First Amendment and the wisely crafted electoral system that the Founders gifted us with.

Ultimately, fake news, micro-targeting, and “voter suppression” can hardly be blamed for Clinton’s electoral defeat when she couldn’t be bothered to campaign in one of the states that ultimately swung the election.

And simply having the larger, national pool of voters can’t prevent foreign governments from trying to sway votes and tip elections.

The fact that Trump turned solid blue states like Wisconsin and Pennsylvania red is a sign that the Electoral College works the way it was intended. It vindicates the idea that regional interests are diverse and that a national candidate should appeal to small and mid-size states, not just the most populous ones.

While the Politico writers bemoan foreign influence in American elections—a worthy concern—pointing to the Electoral College as the problem is barking up the wrong tree.

And if they are so worried about what they called vote “hacking,” perhaps they should support the voter fraud commission that could help weed out illegal votes and ensure election integrity in the states instead of laying waste to our time-tested electoral process.

Regardless, the Electoral College is not a danger to the United States. It is instead a critical element of preserving our national sovereignty and the federalism that strengthens it.