Union Leaders Tried to Bully This California Teacher Into Silence. She Didn’t Give In. 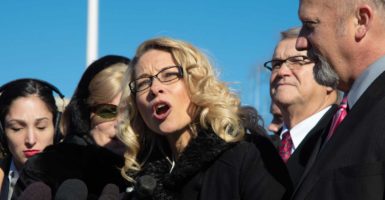 Rebecca Friedrichs brought her fight against teacher unions to the Supreme Court. Today, she is finding other ways to protect the First Amendment rights of public employees who don’t want to join unions. (Photo: Jeff MaletSIPA/Newscom)

Though the issue was unresolved due to a vacancy and split on the court, she has continued to carry on her fight against union leadership.

Friedrichs sat down with The Daily Signal to discuss how she ended up at the center of a major Supreme Court case and her ongoing battle to defend the First Amendment and schoolchildren.

She spoke about how she’s learned about union mentality and the tactics union leaders will use to intimidate teachers and shut down voices of opposition.

The issue at stake in the Friedrichs v. California Teachers Association case was the First Amendment—specifically, whether public employees who didn’t want to join unions could be forced to pay what the union determines is a “fair share” toward collective bargaining, but in practice amounts to political activity.

Collective bargaining is the negotiation between an employer and a labor union’s members to determine wages and the conditions of employment.

Forced dues were allowed under an earlier decision, but in the 2015 case it appeared the court was heading in the direction of overturning that precedent.

But then, Justice Antonin Scalia died just before the case was to be decided, leaving the court split 4-4 in its final decision and leaving the case unresolved.

Now, two more cases dealing with public unions are on the horizon that could dramatically alter their ability to force nonmembers to pay. This would have a massive impact on the nature of public sector unions.

Regardless of how those legal decisions play out, the role of public unions will continue to be a hotly contested issue.

Though Friedrichs said it took a while to arrive at the conclusion that teacher union leadership was a problem, she learned early on that things weren’t quite right.

In an August Heritage Foundation panel, she said that another teacher in her school, whom she called “the witch,” was abusing children by “yanking” their arms and screaming at them.

Realizing this was a shock for Friedrichs, who had a hard time believing this behavior would be allowed to continue.

“I was naive enough to believe that I would walk into a school situation where all children were protected and where all teachers were like me—loved the children, did their best for the children,” she said.

“The No. 1 thing parents want is for their children to be safe and to get a good education,” Friedrichs said. “I don’t think that’s asking too much.”

But because of collective bargaining agreements, Friedrichs said, bad apples like the witch couldn’t lose their jobs.

This led to her questioning the motives of the teacher unions, and eventually the lawsuit she decided to file against her union—the California Teachers Association—25 years after she began teaching.

“It went from watching that abusive teacher. Then I became a teacher, found out I had to pay for representation fees, found out that my money was being used toward political causes with which I disagreed.”

She explained how, even though she wasn’t a member of the union, she still had to pay “agency shop” fees and contribute to what amounted to the union’s political advocacy.

Friedrichs witnessed this firsthand shortly after getting her teaching job. She said:

A few years into my career there was a voucher initiative in my state. I’m for vouchers, I believe in school choice. I was called a radical right-winger by my union rep because I dared to say, ‘No, thank you, I don’t want to be a phone banker and a boots-on-the-ground campaign worker to defeat vouchers.’

‘These Teachers Were All Terrified’

Friedrichs said she finally decided to join the California Teachers Association and become a representative since she was paying it anyway.

However, she quickly found that the union leadership didn’t like her or anyone else questioning its policies, and said the union engages in fact-free campaigns of intimidation to shut down opposing voices.

At an annual leadership conference, she said one teacher stood up and expressed concern over how the union was spending their money on overt political activity. That didn’t sit well with the union leadership.

“Those leaders on the stage and leaders in the room immediately … shut her down,” she said.

The union leaders suggested that their politics were the “correct” politics and insinuated that the teacher’s opposition was due to bigotry. They shut her down in such an extreme way that “the entire room went dead silent.”

“These teachers were all terrified,” Friedrichs said.

The union leaders use a variety of means to ensure that teachers tow the company line, Friedrichs said. They are told they will lose their jobs and will lose their pensions if they don’t support the unions.

“Teachers work in a culture of fear and [the teacher unions] use manipulation tactics, they isolate teachers like myself who dare to speak out,” she said.

While she encountered a lot of public hostility from the unions when she launched what would become a major Supreme Court case, she said she really didn’t blame her fellow teachers.

Many teachers privately supported her, but were afraid they would be attacked for publicly supporting a cause that conflicted with the desires of union leadership.

“It’s too dangerous to have a different thought if that thought doesn’t agree with union think,” Friedrichs said.

“If you agree with union think, you’re safe. If you say the opposite of union think, now you’re going to be bullied, shunned, isolated, labeled, whatever it takes to shut you up.”

‘It’s the Right Thing to Do’

When The Daily Signal asked Friedrichs why she decided to fight the teacher unions, she responded by saying that “it’s the right thing to do.”

Now that she is no longer involved in a Supreme Court case, she decided that she needed to take up her fight by other means.

The State Policy Network, or SPN, is an organization that aids limited government, nonprofit groups at the state level.

She said SPN has given her a platform to take her message to diverse people around the country:

If Americans want to battle back against the power of teacher unions, Friedrichs said, they can start by educating teachers and fellow citizens about the problem those unions cause.

Most of the time teachers only get one side of the story, she said.

“The key for average citizens and parents to start understanding is that it’s the union that’s creating a lot of these problems, and helping teachers understand that,” she said.

Though future Supreme Court cases may eventually curtail the power of public unions over their employees, union leaders are already planning a response.

In July, California passed a bill that requires newly-hired public employees to be given an exclusive orientation by the union that represents them, while taxpayers must foot the bill for their replacements—such as substitute teachers—during their time off work.

In the Friedrichs’ case, liberal Justice Sonia Sotomayor suggested that the unions are perhaps an entity of the government, which could mean that some states could create laws to tax citizens to make up for lost dues.

More blue states may follow with similar legislation if unions can no longer force people to pay up. This means that while the confirmation of Justice Neil Gorsuch may lead to Supreme Court rulings that will preserve Americans’ liberties, the debate over the power of public sector unions will continue.

Of the prospect that states will use tax dollars to compensate for lost union dues, Friedrichs simply said: “If they can get away with it, they will.”