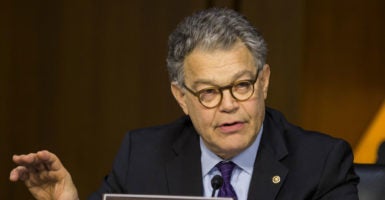 Why jam up the confirmation of a well-respected state jurist to the federal bench?

Franken lamented that “if confirmed … Justice Stras would be a deeply conservative jurist in the mold of Supreme Court Justices Clarence Thomas and Antonin Scalia, justices who the nominee himself has identified as role models.”

That sounds like a ringing endorsement to anyone who cares about the proper role of judges.

With his statement, Franken has clearly signaled that he won’t let through any conservative nominee from Minnesota. This was somewhat surprising since, after a delay, other Democrats have returned their blue slips, letting nominees from Michigan and Indiana proceed.

Blue slips are blue sheets of paper that a nominee’s home state senators return to the Judiciary Committee, signaling approval of the nomination. The weight that blue slips receive has varied over time and today remains ambiguous.

Just who is this nominee?

It came as no surprise when President Donald Trump tapped Stras for a seat on the 8th Circuit—he was one of 21 individuals on the list of judicial rock stars he used to fill the last Supreme Court vacancy.

A graduate of the University of Kansas School of Law, Stras clerked for Judge Melvin Brunetti on the 9th Circuit, Judge Michael Luttig on the 4th Circuit, and Thomas on the Supreme Court.

Stras has served on the Minnesota Supreme Court since 2010. He is believed to be the first Jewish justice to ever serve on that court.

Prior to his judicial service, he practiced law in Washington, D.C., and then was a professor at the University of Minnesota Law School, where he taught constitutional law, federal courts, and criminal law, and was named teacher of the year.

Despite this broad support, the left has criticized Stras’ judicial record by claiming he would rule in favor of corporate interests over the “little guy.”

In one case, the Alliance for Justice, NAACP, and other leftist groups chided Stras for “clinging to what he claimed was the ‘plain and unambiguous language’ of the statute” in a case in which they simply did not like the outcome.

Franken also complained that Stras would “reliably rule in favor of powerful corporate interests over working people, and that he would place a high bar before plaintiffs seeking justice at work, at school, and at the ballot box.”

But this is the same tired shtick the left unsuccessfully trotted out against Justice Neil Gorsuch during his confirmation.

Stras has made his view of judging clear. While he may personally sympathize with certain parties before him, that does not affect his application of the law, and he recognizes he can’t change the law if he doesn’t like it.

In a dissent, Stras reproved his colleagues for changing a statute. He wrote, “It is well established that the judiciary does not write statutes; nor do we amend them, no matter the circumstances. … Amending statutes is, and always has been, the legislature’s job … ”

While Justice Stras’s devotion to the law was on full display throughout his time with us, one thing that was not on display was politics or partisanship. We came to know Justice Stras not as a conservative or a Republican, but as an eminently talented lawyer who strove to discover what the law was, and how our clients could best function within the law. … [T]hose of us who have appeared before him since then in his role as justice have found the same person whom we got to know during his time with our firm: smart, rigorous, cordial, impartial, and committed to the law without politics or partisanship. Win or lose, we have never doubted for a minute that he reached his decisions based on his well-considered view of the law, and not personal, political, or ideological considerations.

Justice Stras has distinguished himself not only as a top-notch jurist, but as a judge who decides cases without regard to political affiliation or party lines. He has sided with both ‘liberal’ and ‘conservative’ justices during his tenure on the court, always in pursuit of applying the law as it comes to him, without ideology or favoritism.

Franken ended his statement against Stras by calling on the president to “seek[] out judges who bridge the issues that divide us … ” But it is in fact Congress’ job to enact policies that bridge the nation’s divides, not judges.

The president should seek out judges who apply the law faithfully and without bias—judges just like Stras.