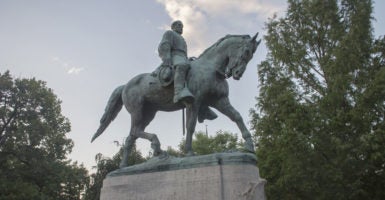 Many statues of Confederate soldiers and generals were constructed out of a renewed spirit of national unity after the Civil War. (Photo: TOMP1/Billy Tompkins/Cover Images/Newscom)

In the wake of the ongoing controversy over Confederate monuments, many who would like to see them removed immediately have pointed to one chart that shows when the statues were put up, presumably to prove they are inherently hateful.

A widely cited study, created by the far-left Southern Poverty Law Center, claims that most of the Confederate statues were constructed specifically in the period under “Jim Crow” laws that targeted black Americans, or in opposition to civil rights.

The fact that they were erected during these two time periods supposedly proves the case that they were meant to intimidate or to “remind” Southern blacks of continuing white supremacy.

The Southern Poverty Law Center then further implies that defending these statues amounts to buoying hate groups, like the one that caused a riot in Charlottesville. The far-left group then one-upped itself by warning that the continued existence of Confederate monuments and symbols could “unleash more turmoil and bloodshed.”

This is an astoundingly paranoid claim given how few people even noticed or cared about the existence of the statues until about a month ago.

Moreover, by making unverified claims about the reasons the statues were built, the Southern Poverty Law Center simplifies the meaning of thousands of monuments that were actually built for a variety of reasons, simply to impugn the motives of a majority of Americans who don’t want to see them removed.

According to a Marist poll, a large majority of Americans (62 percent) favor keeping the Confederate statues, while only 27 percent said they want to take them down. Even a plurality of black Americans also believe the statues should stay.

It would likely shock the 44 percent of black Americans who support keeping the statues to learn that they are supporting white supremacy.

The Southern Poverty Law Center has been careless in the past about the way it labels “hate groups,” lumping in mainstream conservative organizations with neo-Nazis, which at least in one case has led to actual violence.

The broad brush with which it treats these statues is yet another example of how it muddles reasonable differences of opinion. While some monuments were undoubtedly built for sordid and ugly reasons, many others were not, or leave a more complicated legacy than the Southern Poverty Law Center wants to portray.

>>> In Misguided Response to Charlottesville, Apple Donates to Liberal Group That Endangers Conservatives

Nevertheless, the story of the Americans who fought on both sides of that conflict did not begin or end in the horrible four years of war that nearly destroyed our nation and killed 1 in 4 fighting-age men in the country.

When the Civil War broke out in 1861, the global consensus was that America was finished. Even after the Union triumph in 1865, there were extreme doubts that the country could reunite.

It’s a miracle that it did.

In the years immediately after the war, the period when the Southern Poverty Law Center seems to suggest erecting monuments made the most “sense,” most Americans had bigger priorities than statue building.

But as time went by, many in both the North and the South wanted to pay tribute to the generation that went through perhaps the most defining moment in our nation’s history.

Much of the bitterness toward old foes began to dissipate, and many tried to rebuild an American consensus.

The anger that existed between the North and South cooled, and the wisdom of President Abraham Lincoln’s famous second inaugural address—“with malice toward none and charity for all”—began to take hold in earnest as decades passed.

As the country began to truly heal from the scars of the Civil War, the monuments and memorials it built varied, and in spite of the Southern Poverty Law Center’s insinuations, were not all created as symbols of white supremacy or to glorify the cause of the Confederacy.

For instance, Charles Francis Adams Jr., a direct descendent of Presidents John Adams and John Quincy Adams, was born in Massachusetts and fought for the Union Army.

Adams was an anti-slavery man who had put his life on the line to destroy the Confederacy, but in a powerful speech delivered at Harvard University in 1903, he argued that it would be reasonable and positive to build a statue of Lee in the nation’s capital.

He noted that Lee was not the one-dimensional bogeyman that he and many in the North thought of when they fought his Army of Northern Virginia.

Though the war had, thankfully, banished the twin evils of slavery and secession, Adams argued that it was important to remember that good men often fought for bad causes, and to give dignity even to the defeated.

Ultimately, in the end, Lee and the boys who fought in grey “were our countrymen.” Adams argued that depicting Lee atop his steed in Confederate uniform would be educational, and show a once “dreaded and respected” opponent accepting the consequences of defeat.

Rather than a glorification of the Confederacy, some monuments are rightly understood as tributes to the greatness and endurance of the United States, which had come through a bloody trial still capable of reuniting Americans on the same side once more.

A statue to Confederate Gen. Joe Wheeler stands in the Capitol Building and was recently targeted by former Speaker Nancy Pelosi as one of the monuments that needs to go.

But, like many of the targeted monuments’ subjects, Wheeler’s legacy is complicated. After the Civil War, he rejoined the United States military and fought for our country with distinction in the Spanish-American War. He is buried in Arlington National Cemetery.

Shall Americans destroy a statue to a man buried in our most hallowed ground?

The Atlanta monument attacked by protestors in the days after the Charlottesville incident is yet another good example of how extremism and dehumanization of history leads to misdirected rage and destruction.

The monument, constructed in 1911, depicts a Confederate soldier being guided by an angel to lay down his arms in a sign of peace and unity, not glorification of the Confederate cause. The construction had been spearheaded by former Southern soldiers who had toured the North and wanted to create a symbol of healing.

It was among the many monuments built during the supposedly racist spike that the Southern Poverty Law Center pinpointed, which, by the way, also coincides with the 50th anniversary of the war. Americans wanted to pay tribute to their parents and grandparents in much the same way modern generations do for the World War II generation that is now passing on.

Is this a symbol that deserves destruction?

Adams and many others who erected or supported the statues across the battlefields and once war-ravaged cities that dot the South hoped they would stand for more unity, not less.

They knew the price of fraternal feud more than we, hopefully, ever will. But still, they chose forgiveness.

The legacy of many Civil War monuments, both Northern and Southern, extends far beyond the four years of the Civil War.

Unionist regions, which recovered faster from the war, began building monuments within several decades. The massive statues to Union generals that rise over the streets and squares of New York City and Washington, D.C., are the legacy of this movement.

The South rode the coattails of Northern industrial monument construction, relying on its new and cheaper mass-production techniques to construct the monuments themselves at a more affordable expense to small groups and towns. This explains the curious fact that statues to soldiers in the North and South often look identical.

Southerners were buying statues mass-produced in Northern factories—an almost comical symbol of how the regions were rebuilding a national consensus.

It’s clear from the opinion of most Americans that our society still sees value in keeping Confederate monuments. Whether honoring fallen ancestors, seeing the humanity in foes, or in remembering the evils of slavery, they can serve many purposes to our generation, and future ones who will undoubtedly interpret the statues in different ways than we will.

A few heinous extremists don’t deserve to define the debate for the rest of the country, and the Southern Poverty Law Center does a disservice to paint Americans—of many generations—with such sweeping and one-dimensional strokes.