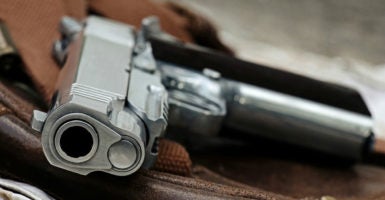 The American Civil Liberties Union has announced it will no longer defend the First Amendment rights of “hate groups” seeking to lawfully exercise their right to openly carry firearms. (Photo: iStock Photos)

On the heels of deadly protests and counterprotests in Charlottesville, Virginia, the American Civil Liberties Union has stated it will no longer defend the First Amendment rights of “hate groups” seeking to lawfully exercise their right to openly carry firearms.

This announcement followed a highly circulated article published by Slate, which accused open carry militias of stifling speech through threats of violence and accused those exercising open carry of bringing firearms with the intent to “hurt people they want to see extinguished.”

It called for a re-evaluation of Second Amendment jurisprudence and decried the idea that “guns won” against the First Amendment in Charlottesville.

Apparently, the guns won without firing a single bullet or causing a single injury. Despite Democratic Gov. Terry McAuliffe’s claim that 80 percent of protesters came armed with semi-automatic weapons, he readily admitted that not a single shot was fired.

It seems once again the fear of open carry is misplaced.

To be clear, the ACLU is a private organization and has every right to decide who it will and will not represent. Similarly, Slate is a private online magazine and can freely advocate any position on gun control it finds most appealing.

It is nonetheless disheartening to see the ACLU, one of the staunchest defenders of the First Amendment, determine that the lawful exercise of the Second Amendment is a disqualifying factor in the organization’s decision to take on a case.

It lends support to Slate’s false assertion that the First and Second Amendments are at war—a complete misunderstanding of the relationship between these two cornerstones of American liberty.

The Second Amendment acts as an insurance measure for the person seeking to exercise free speech, as it serves as a visible deterrent to anyone who would try to suppress that speech using physical aggression.

Even more discouraging is that opposing open carry for those who hold unpopular or offensive views gives voice to the false idea we are hearing more and more: that “hate speech is not free speech.”

There is simply no room for debate over whether so-called “hate speech” is protected. The First Amendment protects the right of anyone to publicly voice support for even the most outrageous and offensive ideologies without being forcibly suppressed by either the government or private individuals.

No matter how disgusting most Americans find the viewpoints of the tiki torch-carrying white nationalists who descended on Charlottesville, even they have a constitutionally protected right to espouse their repugnant views.

The Supreme Court has repeatedly and unequivocally held that hateful, offensive, and unpopular speech is protected by the First Amendment.

Speech is not criminal simply because the speaker intends to provoke anger, alarm, or resentment in others on the basis of race, color, gender, religion, or creed. The First Amendment exists to protect speech, not subjective feelings.

The First Amendment does, of course, have some limits. It does not protect fighting words or incitement to imminent violence (though it does protect inflammatory speech that generally advocates violent actions).

In Virginia v. Black, the Supreme Court upheld as constitutional state laws that criminalized the burning of crosses where such actions were meant as intimidation, but it also ruled that a state cannot determine by law that the burning of such crosses constitutes prima facie evidence of intent to intimidate.

At the very least, Virginia v. Black provides a tenuous connection to the question of whether open carry during speech is intimidation. At best, it arguably asserts a defense for open carry advocates against those who would automatically deem the carrying of firearms evidence of intent to intimidate.

The case for restricting open carry during public rallies is even further dismantled by the Second Amendment itself. While the open carry of firearms can certainly be construed as “unprotected speech” for First Amendment purposes, for the 45 states permitting some form of the practice, open carry is protected under right to keep and bear arms in a way cross-burning is not.

Slate seems to suggest a balancing test for determining whether the exercise of the Second Amendment is outweighed by the risks of gun violence. This type of test, however, was explicitly rejected by the court as insufficient for protecting an enumerated right.

This is important. There are, unfortunately, individuals whose explicit goal is the use of physical violence as a means of suppressing views they find abhorrent.

In a twisted notion of tolerance, they assert the “right” to suppress nonviolent but offensive speech with actual violence. They show up prepared to inflict bodily harm with any means available, from fists and pepper spray to baseball bats and improvised flamethrowers.

There is no legal basis for this dangerous ideology, and it is in fact the hallmark of all historical reincarnations of tyranny.

Violent suppression and censorship of ideas is a dogma that has justified book burnings and authorized re-education camps. It has vindicated the most vicious of ideological purgings and ushered in the most oppressive of dictatorships.

It now undergirds the expressed motives of supposedly valiant and liberty-minded “anti-fascists.”

It is not only disheartening for the ACLU to demand that socially ostracized groups forego their Second Amendment rights or forfeit the organization’s defense of their First Amendment rights. It is dangerous.

It emboldens counterprotesters who would fight subjective offense with objective violence, and it perpetuates the notion that those with socially disagreeable viewpoints are entitled to a lesser level of constitutional protection.

The ACLU, Slate, and other open carry objectors misidentify the problem. They wrongly implicate those carrying firearms as the people who are suppressing free speech and are liable to cause a wave of violence.

This is, statistically speaking, absurd. On the whole, legal gun owners are not the cause of most gun crime.

In Charlottesville, not a single bullet was fired by those exercising their right to open carry. Not a single injury was attributed to firearms. Not a single arrest was made for improper use or threatening behavior associated with the lawful open carrying of guns.

There are undoubtedly some people who will view this appeal to constitutional protections for socially offensive groups as an endorsement of their messages. But this is not only false, it is intellectually dishonest.

Leading conservative outlets no more endorse the views of the white nationalists whose rights they defend than the ACLU defends the message of the neo-Nazis, racist fraternities, or funeral-protesting churches, whose constitutional rights the ACLU routinely defends.

Rather than weakening the protection of fundamental First and Second Amendment rights, the proper (and constitutional) response to abhorrent ideas is to bring them to the intellectual woodshed and break them to pieces on the chopping block of reason.

Moreover, the solution is never to pit the Second Amendment against the First Amendment. The two mutually support each other and together strengthen individual liberty, just as the Founders intended.

The ACLU would do well to recognize that.