Here Are 8 Monuments That Have Been Attacked Since Charlottesville 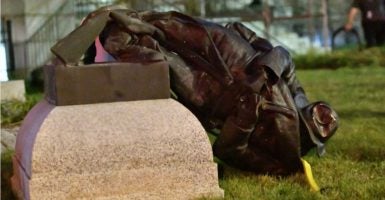 ''The Boys Who Wore the Gray'' statue crumpled on the ground after protesters tore it down in Durham, North Carolina. (Photo: Fabian Radulescu/Zuma Press/Newscom)

Since the awful riot that took place at the base of a Gen. Robert E. Lee statue in Charlottesville, Virginia, earlier this month, activists and vandals have responded throughout the country by looking for 100-year-old monuments to destroy.

While it may be bad enough to strip down history, the process should rightly remain in the hands of local communities and be done through a legal and democratic process. Many of these statues are indeed of great men, but what truly makes America great is that we are a nation of laws and not men.

The monuments targeted for destruction are not just of Confederates—they are of Founders, explorers, emancipators, and religious men as well.

While polls have shown that most Americans want to keep the Confederate statues, lawless mobs and vandals have decided for us that history must be destroyed and dumped, perhaps literally, into the ash heap of history.

The following are some of the most egregious examples of monument defacement and destruction that have taken place in just a single week.

A 225-year-old statue of Christopher Columbus, the famous explorer who opened up the New World to colonization, was smashed by an individual wielding a sledgehammer in Baltimore, Maryland.

The act of vandalism was filmed, narrated, and posted on YouTube.

In the video, the narrator said:

A sign was placed in front of the monument that read, “The future is racial and economic justice.”

2.) Durham Statue to the ‘Boys Who Wore Gray’ Toppled

Immediately following the Charlottesville incident, a crowd assembled in front of a Confederate monument in Durham, North Carolina, dedicated to the young men who fought for the Confederacy in the Civil War.

The protesters tied a rope to the bronze statue and pulled it down as police looked on.

Once the statue had been brought down, the gathering kicked and spat on it.

A number of the activists who participated were arrested afterward. One of those arrested, Taqiyah Thompson, a student at North Carolina Central University, is a member of the Workers World Party, according to The Daily Caller.

The Workers World Party is a Marxist-Leninist organization that defends the North Korean regime.

A mob in Atlanta attacked and damaged a monument constructed in 1911. The “Peace Monument” depicts a Confederate soldier laying down his arms. A protester climbs the Confederate Peace Monument in Atlanta Georgia in an attempt to topple it. (Photo: Curtis Compton/TNS/Newscom)

The memorial wasn’t devoted to the Confederacy. It was instead built to pay tribute to unity between North and South as the Civil War generation faded from memory.

That didn’t matter to the activists who unsuccessfully tried to tear it down.

The Lincoln Memorial in Washington, D.C., was defaced with spray paint.

The vandal, or vandals, painted the words “F— Law” on one of the stone columns that adorns the front of the structure.

#LincolnMemorial defaced with explicit graffiti // They will never stop destroying everything in their path… https://t.co/sie9ALdkpo

The National Park Service began cleaning up immediately, but so far, no arrests have been made in connection to the incident.

Sadly, this wasn’t the only tribute to the Great Emancipator that was attacked in the days following Charlottesville.

A giant bust of Lincoln that had been sitting in a Chicago neighborhood for 100 years was burned and badly damaged.

“What an absolute disgraceful act of vandalism,” Alderman Ray Lopez wrote, according to The Epoch Times.

But shortly thereafter, the bust was vandalized again when someone slacked thick tar on it.

City officials are now looking to remove the piece of history to a safer location.

A statue of Father Junipero Serra was plastered with red paint and the word “murder” in a Los Angeles park.

Serra was a key figure in building a series of Spanish Catholic missions in California in the 1700s and was declared a saint by Pope Francis in 2015.

“Junipero sought to defend the dignity of the native community, to protect it from those who had mistreated and abused it. Mistreatment and wrongs which today still trouble us, especially because of the hurt which they cause in the lives of many people,” the pope said at the canonization ceremony.

A teenager allegedly threw a rock through a glass pane of the Boston Holocaust Memorial.

The glass shattered, but the vandal was detained by bystanders who said they saw the incident take place. Though the statue had been unmolested since its construction in 1995, this was the second such incident since June.

A visage of Lee carved into limestone at Duke University was badly mauled.

The statue, which was above the entryway of Duke Chapel, was carved up and had a chunk of its nose removed. Instead of repairing the statue, the school simply removed it.

“I took this course of action to protect Duke Chapel, to ensure the vital safety of students and community members who worship there, and above all to express the deep and abiding values of our university,” Duke University President Vincent Price wrote in a letter to students and faculty, according to the Associated Press.

An attack on a Houston statue was fortunately thwarted by police before it could be carried out.

A 25-year-old man, who was allegedly carrying materials that could be turned into explosives, was arrested near the statue of a Confederate soldier.

The man had previously been arrested and convicted for improperly storing explosives.

According to the Associated Press, when asked why he was targeting the statue, the accused said he didn’t “like that guy.”

The statue was dedicated to Irish immigrant Richard W. Dowling, and was “erected in 1905 to honor rebel soldiers who died at the Battle of Sabine Pass,” according to the Houston Chronicle.