5 Rules for Sending Contractors to War in Afghanistan 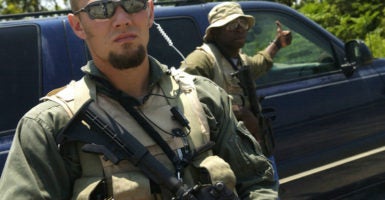 An increase in the use of contractors may be part of the U.S. strategy in Afghanistan going forward. (Photo: Chris Curry/Zuma Press/Newscom)

The odds of the U.S. pulling away from the fight in Afghanistan are near zero.

There are good reasons for that—all revolve around preventing the country from becoming a safe haven for terrorist groups again.

The tougher challenge is crafting the right way forward after three terms of indifferent presidential leadership. Innovations in contractor support should be part of the mix, if done right.

Still a War to Be Won

In this war, winning means achieving a stable Afghanistan that can stand by itself rather than be a source of regional instability and a base for the global Islamist insurgency.

For the U.S. to walk away now is unthinkable. The pain would far outweigh the gain. It is not, as some say, a matter of sunk costs. What we must consider is the future.

Walking away would send the country in a time warp back to 2001. That would create significant regional instability, jeopardizing the United States’ most critical relationship in the South Asia-India region.

It’s hard to imagine how the U.S. and India can partner more on many common economic, security, and diplomatic interests if India is increasingly worried about a collapsing Afghanistan.

A U.S. withdrawal would also prompt Pakistan to turn increasingly to China. China’s long-term interests in Pakistan are clear. If Beijing has its way, Pakistan will become another vassal state.

China will use Pakistan to poke India when it pleases in the same way it uses North Korea to keep the U.S., Japan, and South Korea off balance in Northeast Asia.

Pulling back would also be a foreign policy disaster for President Donald Trump on the scale of President Barack Obama’s misstep of pulling out of Iraq in 2011, which opened the field for the Islamic State, also known as ISIS.

Having led the first substantive victory against the global Islamist insurgency in almost a decade, and with the ISIS “caliphate” now collapsing, letting the transnational terrorists back in the game in Afghanistan would be a self-inflicted wound for Trump and would undermine his promise to keep us safe.

The Art of Contracting War Support

The president wants to be convinced that this time, there is a plan that doesn’t squander American blood and treasure for little gain. Fair enough.

Among the options being proposed is a more aggressive use of contractor support, so as to make the Afghan military a more capable force in the field.

A better Afghan military is crucial to any future strategy. They must be able to take back and hold territory against the Taliban, and they must be able to conduct operations in the face of debilitating losses of trained, experienced, and dependable personnel.

Arguably, particularly in the areas of aviation support and logistics, competent contracting could be both more effective and efficient.

The trick is doing it right. The fact is that contracting has been a ubiquitous component of the American way of war since Vietnam, and the trend has only accelerated in the wars in Iraq and Afghanistan.

It will continue to be so, in part because the capacity of the private sector to provide goods and services on the scale that until now only governments could provide continues to grow. Governments that can effectively harness the private sector have a huge competitive advantage.

After almost two decades of using contractors heavily in combat, it is pretty clear what works and what doesn’t.

Contractors were often demonized under President George W. Bush, but that was largely owing to the left’s greater dissatisfaction with the war itself.

The proof is that the complaining immediately dried up once Obama took office, even as we continued to rely on contractors just as much, if not more, than before. There was simply no political gain in going after them.

It is likely that in the hyperpartisan era we are now in, a new high-profile contracting initiative would bring back the same partisan sniping. That likely can’t be avoided.

But if contracting is the right step to take, the administration should suck it up and do it. After all, it will always be attacked no matter what it does.

The Rules of Contract War

Beyond issues of cost and effectiveness, there are few limits to what governments can contract out other than its own responsibility and oversight.

Ultimately, government is as responsible for the conduct of its contractors as it is for its military forces. Contractors are not “mercenaries” so long as they are employed by a legitimate party to the conflict, i.e. the U.S., Afghan, or other NATO countries operating in the country.

That said, there are some important considerations for ramping up contractor support in Afghanistan. Here are five rules.

Rule 1: Liability must be clear.

Contractors have to be legally accountable to government. There are different ways to arrange that, but it is a non-negotiable requirement, and Afghanistan as the host country would have to agree.

Rule 2: There must be sustainability.

It must be clear how contractors will be sustained in terms of logistical support and pay. That arrangement needs to be clear and supportable over time at an acceptable cost.

Rule 3: There must be accountability.

Rule 4: It must make sense.

Contractors are not a panacea. Contracting is not an outsourcing of war. Governments are still responsible.

Moreover, contractors are often not cheap, and for some areas like ground combat, they are clearly inappropriate. They are an effective option for certain select tasks and purposes, and those must be identified.

Contractors are not an army. They’re simply a tactical tool, like a tank.

In Afghanistan, the U.S. still needs a policy that pushes the Afghans to sustain a modicum of inclusive, responsible governance. The U.S. needs to continue to lead an aggressive counterterrorism effort against al-Qaeda and ISIS.

Anti-corruption efforts in the Ghani government need to accelerate, including the purging of dishonest leaders. The U.S. needs to pursue a “tough love” policy on Pakistan, ending support for terrorist and Taliban safe havens.

Finally, a process must be established for the eventual demobilization, disarmament, and reintegration of defeated Taliban members back into society.