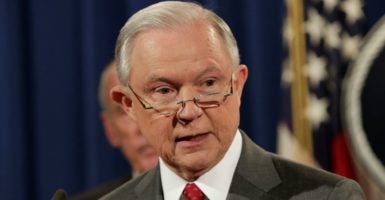 The federal civil rights investigation into the weekend violence that occurred in Charlottesville, Virginia, could involve domestic terrorism and hate crime charges and isn’t limited to the driver who plowed his vehicle into a crowd of people, according to the Trump administration.

Speaking on ABC’s “Good Morning America,” Attorney General Jeff Sessions said Monday, “It does meet the definition of domestic terrorism in our statute.”

In a fact sheet, the administration mentioned both possibilities. But a hate crimes case would be easier to bring because domestic terrorism cases involve a much higher burden for prosecutors, said Horace Cooper, a former constitutional law professor at George Mason University.

A hate crime is an act of violence targeted at someone because of their identity—and it must be a legally protected class to be prosecuted. Domestic terrorism is violence intended to intimidate or coerce a civilian population.

The government has determined it has evidence to be suspicious that the suspect intended to send a message and not just harm immediate victims, according to the administration.

The key target of the investigation will almost certainly be 20-year-old James Fields Jr., the driver of the Dodge Challenger that charged into a crowd of counterprotesters, injuring 19 people and killing 32-year-old Heather Heyer.

Federal investigations could become more expansive to include anyone who might have lied or tried to cover up for Fields. This could include an obstruction or conspiracy charge for others, Cooper said.

“You would have to prove a conspiracy in advance to make it easy to prove other people were involved,” Cooper told The Daily Signal.

Other incidents of riots or assaults would likely be prosecuted at the local level, Cooper said.

State prosecutors have already charged Fields with second-degree murder, among other charges, while the federal government is gathering additional evidence.

It’s also more likely to be a hate crimes probe than a terrorism charge, said Cooper, who previously was chief counsel for House Majority Leader Dick Armey and is now the co-chairman of Project 21, a black conservative advocacy group.

But, he noted, hate crimes aren’t easy to prosecute. In this case, Fields’ defense lawyer could argue about the identity of the victim killed, because Heyer, a white female, isn’t the primary target of Fields, reportedly a neo-Nazi.

“The dead person in this case doesn’t necessarily meet the animosity of the alleged perpetrator,” Cooper said. So a defense attorney could contend, “was it racial supremacy views or was it road rage?”

President Donald Trump met at the White House Monday with Sessions and FBI Director Christopher Wray about the investigation into the rally by white supremacists that led to clashes with counterprotesters and three fatalities.

“To anyone who acted criminally in this weekend’s racist violence, you will be held fully accountable. Justice will be fully delivered,” Trump said after his meeting.

He later added, “As a candidate, I promised to restore law and order to our country and our federal law enforcement agencies are following through on that pledge. We will spare no resource in fighting so that every American child can grow up free from violence and fear.”

Acting U.S. Attorney Rick Mountcastle is leading the investigation, along with his career staff in the Justice Department’s Civil Rights Division’s Criminal Section and the FBI. The probe will not be limited to the man who drove into a crowd, killing a woman, but will also investigate whether others were involved in planning the attack.

“We will continue to support our state and local officers on the ground in any way possible,” Sessions said in a statement Saturday. “We stand united behind the president in condemning the violence in Charlottesville and any message of hate and intolerance. This kind of violence is totally contrary to American values and can never be tolerated.”

On another front, a federal prosecutor could bring interstate charges for those at the rally carrying guns, Cooper said. While Virginia is an open-carry, the law doesn’t apply to those who are residents from jurisdictions that don’t allow open-carry.

“A federal investigation can sweep up matters to include unrelated incidents,” Cooper said.

Two other fatalities at the scene of the Charlottesville riots were Virginia State Police troopers H. Jay Cullen, 48, and Berke Bates, 40, who were killed in a helicopter crash while policing the rally. But authorities reportedly don’t suspect foul play.

Federal investigators should look into how state and local police monitored the rally, said Stacy Washington, also a co-chairwoman of Project 21. She noted that the left-wing group Antifa, also known for violent disruptions, seemed to be too close to the white nationalists,

“We are talking about a clash of the morons, white nationalists and Antifa. They represent a fringe of America,” Washington, a talk radio host and Air Force veteran, told The Daily Signal.