White Supremacists Will Not Tear America Apart. We’re Better Than This. 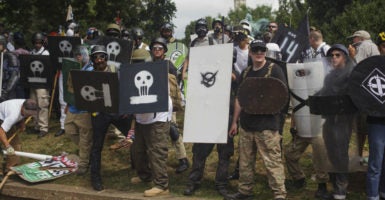 Note: The following is based on an official statement released by Sen. Ted Cruz, R-Texas.

It’s tragic and heartbreaking to see hatred and racism once again mar our great nation with bloodshed.

Heidi’s and my prayers are with the loved ones of those killed and injured in the ongoing violence in Charlottesville.

The First Amendment protects the rights of all Americans to speak their minds peaceably, but violence, brutality, and murder have no place in a civilized society.

The Nazis, the KKK, and white supremacists are repulsive and evil, and all of us have a moral obligation to speak out against the lies, bigotry, anti-Semitism, and hatred that they propagate.

Having watched the horrifying video of the car deliberately crashing into a crowd of protesters, I urge the Department of Justice to immediately investigate and prosecute this grotesque act of domestic terrorism.

These bigots want to tear our country apart, but they will fail. America is far better than this.

Our nation was built on fundamental truths, none more central than the proposition “that all men are created equal, that they are endowed by their Creator with certain unalienable Rights, that among these are Life, Liberty, and the Pursuit of Happiness.”

Editor’s note: The Department of Justice has opened an investigation into the violence surrounding the white nationalist rally in Charlottesville.