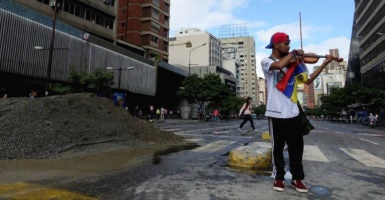 Wuilly Arteaga became a visible figure in Venezuela's protest movement before being shot with a buckshot and arrested by the government. (Photo: Carlos Garcia Rawlins/Reuters/Newscom)

Paul Coyer is a foreign policy and national security analyst who serves as a research professor at the Institute of World Politics.

Marjory Serrano is a professional violinist from Venezuela. She is the concertmaster of the Pro Arte Chamber Orchestra of Greater Washington, D.C., and also plays first violin with the Apollo Orchestra in Washington, D.C.

One of the stories coming out of Venezuela that has simultaneously saddened and inspired has been that of Wuilly Arteaga, a talented young violinist who grew up in the poorest part of Valencia, Venezuela’s third largest city.

Wuilly taught himself violin and won a place in one of Venezuela’s youth orchestras that are part of the country’s famous classical music program, “El Sistema,” despite having no formal training.

Wuilly’s contribution during Venezuela’s ongoing crisis has been to play patriotic Venezuelan songs on his violin during the street protests against the authoritarian rule of President Nicolas Maduro and the Socialist Party of Venezuela.

Wuilly is unassuming and soft-spoken, but his street performances have reflected an inner strength and determination that have inspired many and made him an international symbol of the Venezuelan people’s fight for freedom.

Wuilly first came to international attention in late May when during a protest a Venezuelan National Guardsman grabbed his violin out of his hands and smashed it in front of him. The video of that incident went viral and brought him to our attention as well.

Marjory, a Venezuelan-born classical violinist who had immigrated to the United States (and one author here), had been carefully following developments in her native country and keeping in regular communication with family and friends, worried about their safety. She was horrified by what she saw in the video.

Marjory’s husband, Paul (co-author here), had been writing on the unravelling of Venezuela for Forbes since 2015 and was also carefully watching developments there.

Shortly afterward, and quite unexpectedly, our paths crossed in Washington, D.C., when Wuilly was brought to the United States by Robert Carmona-Borjas’s Arcadia Foundation in order to help draw attention to events in Venezuela.

In order to avoid drawing attention from authorities at the airport, Wuilly traveled without his violin and thus arrived in Washington without an instrument. Through mutual friends, Marjory was introduced to him and lent him one of her violins, which he used during the whole of his stay.

He told Marjory, “I love this violin!” Marjory responded, “Me, too—it is a fighter!”—a description Wuilly loved given the role the violin was playing in his fight for the freedom of his country.

The three of us spent quite a bit of time together, along with mutual friends, talking about our hopes for Venezuela’s future. Wuilly was always optimistic about the future of his country, despite the dark period it is going through now, and his love of country shone brightly.

Since he had never had formal training, Marjory gave him a personal master class in technique in Washington. She also performed with Wuilly at an event at Georgetown University.

Unfortunately, all of the attention Wuilly received, particularly on television, angered Venezuela’s authoritarian rulers. His return home was fraught with danger, but his heart is in Venezuela and he has a deep sense of responsibility to contribute to the ongoing struggle there.

Shortly after he returned, Wuilly was playing in the street protests when he was shot in the face with buckshot by a National Guardsman and came within a few inches of losing an eye. He was brought to a hospital for treatment, and doctors told him to rest completely for at least 15 days. Wuilly Arteaga was shot with a buckshot by a National Guard member while playing his violin. (Photo: Wuilly Arteaga via Robert Carmona-Borjas)

Within a day or so, however, his spirit irrepressible, he went back to the streets. A few days later he was arrested and taken to a National Guard prison facility, where he has been tortured.

He has been struck on the side of his head with his violin and now suffers hearing loss, his hair has been burned with lighters, and he is being denied medical treatment.

The NGO Foro Penal has attempted to assist Wuilly, but has been largely kept on the sidelines by the government.

The government is rigging the legal system against Wuilly and all of its political prisoners. Sunday, July 30, in a secret hearing and without his own counsel, Wuilly was brought before Judge Pablo Verdú, who has an insidious record of persecuting political dissenters, faced a hand-picked government prosecutor, Yamileth Romero, who accused him of “inciting violence” and being “in possession of inflammatory substances.”

Clearly the government is afraid of Wuilly and his violin.

As those who have been following the deteriorating situation in Venezuela are aware, the country’s government is determined to hold onto power no matter what. Wuilly is only part of the human cost of his government’s lust for unfettered power.

Nevertheless, he has become for many the human face of an ongoing national tragedy. Small in physical stature yet indomitable in spirit, Wuilly Arteaga symbolizes the determination of the Venezuelan people to triumph over those who would imprison them.

Let us pray that they prevail.

Note: Due to an editing error, an incorrect version of this article was previously published. This version has been corrected.