In Video, Planned Parenthood Medical Chief Tells How to Get Around Ban on Partial-Birth Abortion 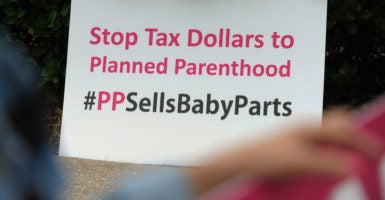 The pro-life group group Operation Save America distributed this message in front of a Planned Parenthood clinic in Orlando, Florida, during a 2015 demonstration calling for defunding the abortion provider. (Photo: Paul Hennessy/Polaris /Newscom)

In the latest hidden-camera video from the Center for Medical Progress, Dr. Suzie Prabhakaran, vice president of medical affairs for Planned Parenthood of Southwest and Central Florida, talks about using a “checkbox” to get around the 2003 law banning partial-birth abortion.

In the video, released Thursday as the Senate again debates defunding the nation’s largest abortion provider, Prabhakaran speaks with investigators from the pro-life group posing as buyers of fetal tissue from a biotech company.

Prabhakaran is seen explaining that to circumvent federal law against partial-birth abortions—in which the unborn baby is extracted partway and then killed—Planned Parenthood doctors document their intent either to perform a dismemberment abortion or to use a feticide such as digoxin, which kills the baby beforehand.

“Every time you do a procedure, that’s how you document,” Prabhakaran says at 4:02 on the video. “So, like, there’s like a checkbox … So before the procedure, you do your evaluation, you write: ‘I intend to utilize dismemberment techniques for this procedure.’”

The video was shot at a Planned Parenthood conference in Orlando, Florida, according to the Center for Medical Progress, a nonprofit that has released a series of undercover videos targeting the organization’s ethics and morality in the past two years.

In it, Prabhakaran explains that her affiliate is merging with a Planned Parenthood clinic in Orlando that performs abortions up to 22 weeks and six days into a pregnancy. She says the clinic does a high volume of procedures, with “18 abortions at 18 weeks and above scheduled for the next week,” according to a Center for Medical Progress press release.

By marking a box showing intent to perform a dismemberment abortion, in which the baby is removed in pieces, and not use the deadly digoxin, Parabhakaran says at 5:52 in the video, “I’m not doing digoxin, and we’re just gonna document and there’s never been a problem.”

In a clip from an earlier video, Dr. Deborah Nucatola, senior director of medical services for the Planned Parenthood Federation of America, is seen saying at 3:12 that “laws are up to interpretation.”

“So there are some people who interpret [the partial-birth abortion ban] as, it’s intent,” Nucatola says. “So if I say on Day One I do not intend to do this, what ultimately happens doesn’t matter.”

The Planned Parenthood Federation of America, which issued a press release attacking Republicans’ “skinny repeal” of Obamacare, did not respond to The Daily Signal’s requests for comment on the video.

David Daleiden, head of the Center for Medical Progress, said in a press release that “the fact that Planned Parenthood has a ‘dismemberment checkbox’ on their abortion forms should tell the public and policymakers everything they need to know about this barbaric abortion business.”

In response to the group’s latest hidden-camera video, Marjorie Dannenfelser, president of the pro-life Susan B. Anthony List, said in a press release that the nation’s “forced complicity in this atrocity must end.”

We urge our pro-life allies in the Senate to watch this video today and refresh their resolve to ensure that any health care reform legislation includes provisions to redirect Planned Parenthood’s tax dollars to community health centers and also rolls back Obamacare’s abortion expansion.

Abortion is not health care, and pro-life grassroots elected a pro-life House, Senate, and White House in 2016 expecting these victories. Congress must send a bill defunding Planned Parenthood and undoing the damage of Obamacare to President Trump’s desk for his signature.