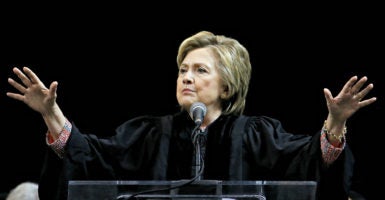 As President Donald Trump calls for the Justice Department to probe the actions of his vanquished opponent, Hillary Clinton, four Republicans on the House Judiciary Committee want another look at the FBI’s investigation of the Clinton email scandal.

The lawmakers’ interest comes after Comey, ousted May 9 by Trump, told a Senate panel in June that, during the Obama administration, Attorney General Loretta Lynch had directed Comey to call the FBI’s probe of Clinton’s private email server a “matter” instead of an “investigation.”

Comey also told the Senate Judiciary Committee in May that Lynch’s meeting with Clinton’s husband, former President Bill Clinton, on an airport tarmac caused him to lack confidence the Justice Department could credibly conclude the investigation.

Lynch told Comey “to mislead the American people about the Clinton email investigation,” Jordan said in a prepared statement, adding:

James Comey testified to this fact under oath. Even Sen. Dianne Feinstein [D-Calif.] said this should be investigated. I’m supporting the efforts of my colleague Congressman Matt Gaetz to have a special counsel investigate this important issue.

Gaetz initiated the proposal to investigate what the FBI did, noting the “baseless accusations” against Trump and the delay of presidential appointees.

“These smoke-and-mirrors efforts do little to serve the nation’s interests, and provide a convenient distraction from the many concerning, suspicious, and potentially illegal actions involving the FBI and the previous administration,” Gaetz said in a statement.

“That inaction ends today,” Gaetz added, “because today, my colleagues and I started going after the real criminals. May justice be served.”

The investigation into Clinton’s private email server ended when Comey held a July 5, 2016, press conference in which he called Clinton reckless in her use of a private email account and server to conduct official business as secretary of state but said “no reasonable prosecutor” would bring a criminal case against her.

During the campaign, candidate Trump said he would appoint a special prosecutor to investigate the Clinton email scandal. But after winning, he said: “I don’t want to hurt the Clintons.”

However, this week, the president denounced Attorney General Jeff Sessions on Twitter, and wondered why he hasn’t directed an investigation into Clinton regarding her interactions with Russia and Ukraine.

Americans also need to know more more about what the Obama administration did in Clinton-related probes,  Johnson said.

“There is little question that members of Obama’s administration repeatedly broke protocol throughout their investigations into Hillary Clinton,” the Louisiana Republican said. “What is unclear, however, is why we have received few answers over the past 12 months to our questions about their actions, especially concerning the former attorney general and FBI director.”

“My colleagues and I introduced this amendment because we are tired of passively allowing the left and the radical media to distract from the Republican agenda through wild accusations,” Biggs said, adding:

Most of the claims made about President Trump and his team are nothing more than unfounded, unsourced, anonymous allegations that merely serve the purpose of trying to delegitimize the president and prevent Congress from carrying out the agenda we promised to the American people. It is time for the left to respond to the blatant misconduct of Hillary Clinton, Eric Holder, James Comey, Susan Rice, and Loretta Lynch.

Holder was Obama’s first attorney general. Rice served as ambassador to the United Nations and later as national security adviser.