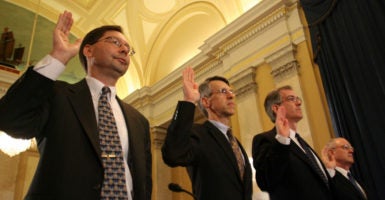 Note: The following is based on remarks made at the White House by Heritage Foundation senior legal fellow Hans von Spakovsky.

I want to thank President Donald Trump for the honor of having appointed me to the Advisory Commission on Election Integrity.

I come at this issue of election integrity from very personal history. My German mother grew up in Nazi Germany as a child. My Russian father fought and escaped communism twice. They met in a displaced persons camp in Europe, after the end of World War II, before immigrating to the United States.

My childhood was filled with stories of what it’s like living in a dictatorship—and we were taught as children that the right to vote is a very precious right, it’s one that can be easily lost, and that it was our duty to always vote and participate in the democratic process.

I want to ensure that every American who is eligible is able to vote, and that his or her vote is not stolen or diluted because of administrative mistakes, errors by election officials, or intentional wrongdoing by those who are willing to take advantage of what we have, which is basically an honor system.

I have almost three decades of experience in the field of voting and elections. That includes not only legal experience as a lawyer in the Department of Justice, enforcing federal laws that protect the right to vote, but I’ve also been a local county election official in two states, Georgia and Virginia. So I know very well how hard election officials work to try to administer the voting process fairly.

But we do have problems that need to be fixed. We have vulnerabilities in the administrative system that we have, and we also have a history of voter fraud in this country.

The Supreme Court itself said in 2008, when it upheld Indiana’s voter ID law, the U.S. has a long history of voter fraud, and it could make the difference in a close election. And we have many close elections in this country.

One of the documents I want to hand out to everyone on the commission is a database that The Heritage Foundation started about two years ago of voter fraud cases from around the country. We are up to almost 1,100 proven cases of voter fraud, including almost 1,000 convictions of individuals in court.

These cases run the gamut and show all ways that voter fraud is committed in this country. It includes impersonation fraud at the polls, false voter registrations, duplicate voting, fraudulent absentee ballots, vote buying, ineligible voting by felons and noncitizens, altering of vote counts, and ballot petition fraud.

We know we have problems with the accuracy of our voter registration lists. Numerous studies have been done about this that show—including the Interstate Crosscheck Program—that we have literally hundreds of thousands of voters who are registered in multiple states, and we have many people who are deceased remaining on the voter rolls.

No systematic, all-encompassing study has been done about these problems. But we know that more must be done to improve the accuracy of our voter registration system and the security of our voting process.

I have full confidence in this commission, which is a bipartisan commission, and I look forward to working with my colleagues. But I can’t end my remarks without addressing what I consider to be the unfair, unjust, and unwarranted criticisms that have been leveled at this commission and some of its members.

My father passed on to me the belief that one of the best things about America is the ability to have spirited but civil debates, even on contentious issues. Yet we seem to have lost that valuable part of our democratic process.

Members of this commission, including me, have already been subjected to vicious and defamatory personal attacks. Those who want to ensure the integrity of the election process are only interested in preserving our great democracy.

The scurrilous charges that have been made are reprehensible and a tactic, frankly, to avoid a substantive debate on important issues and to prevent the research, inquiry, and study that is necessary to identify the problems in our election process, to determine what the solutions are, and to therefore ensure that we have the best election and best democratic system in the world.