Victim’s Mother Speaks Out Against Protection Granted to Illegal Immigrants 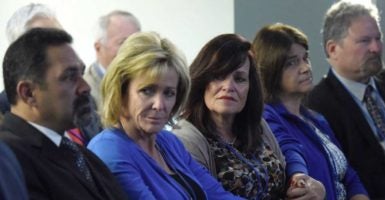 The mother of a police officer who was killed in a car accident in 2014 is calling on Americans who have been affected by acts of violence from illegal immigrants to speak out against incidents like the one that took her son’s life.

“We want Americans to come out of the shadows and let their fellow Americans know what’s happening to them,” Mary Ann Mendoza said in an interview on “Tucker Carlson Tonight.”

Mendoza’s son, Sgt. Brandon Mendoza, 32, was killed in 2014 by an illegal immigrant in a head-on collision on his way home from work at the Mesa Police Department in Arizona. The driver, Raul Silva-Corona, died on impact after having driven more than 30 miles on the wrong side of the highway. It was later found that Silva-Corona’s blood alcohol level was 0.24 percent, three times the legal limit.

According to USA Today, Silva-Corona was an illegal immigrant who was convicted of criminal activity in Colorado in 1994. However, at the time, multiple charges against him were dropped when prosecutors were “lenient.” As a result, he was never deported and remained in the United States illegally.

Now, Mendoza is speaking out, saying, “I don’t know when the turn happened in this country of when politicians are now protecting illegal criminals in our country more than they’re protecting you and I.”

Mendoza announced her support for two bills that recently passed the House that would strengthen protection against illegal immigration and the sanctuary cities that shelter immigrants.

The first bill, Kate’s Law, would place a five-year minimum prison sentence on illegal immigrants who are deported and then return to the United States, and the No Sanctuary for Criminals Act would deny certain federal grants to sanctuary cities.

Kate’s Law was named after Kate Steinle, 32, who was shot and killed by an illegal immigrant who had been deported five separate times.

Five other families joined Mendoza in announcing the creation of an advocacy group, Advocates for Victims of Illegal Alien Crime, which intends to be “truth-tellers” who “want to bring to light not only the murders of Americans, but the people who are affected by rape, assault, and identity theft” as a result of illegal immigration.

Mendoza criticized the mainstream media for not providing the right crime statistics regarding what is happening to Americans within the country and for painting people such as herself as “anti-immigrant.”

“They lie about the fact that people like myself are anti-immigrant,” Mendoza said during her interview with Carlson, “which is the furthest thing from the truth. I am anti-illegal criminals in our country.”