18 States Sue Betsy DeVos Over Delayed Regulation Enforcement. Why the Delay Is a Good Thing. 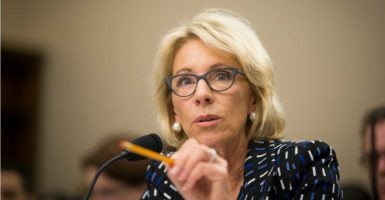 Under the leadership of Secretary Betsy DeVos, the Department of Education has delayed the enforcement of a harmful regulation that is a burden to taxpayers. (Photo: Rin Schaff/UPI/Newscom)

Under the banner of student loan borrower protection, the Obama administration placed significant regulations on institutions of higher education. The most egregious of which is called “borrower defense to repayment,” which opens the door for students to claim that their university was fraudulent for virtually any reason.

If the school is found guilty of defrauding a student, which does not require proof that a school intended to commit fraud, a student can have his student loans discharged.

Under the leadership of Secretary Betsy DeVos, the Department of Education has delayed the enforcement of this rule, which was set to go into effect July 1.

The District of Columbia, along with 18 other states, have now filed a lawsuit against the Department of Education, claiming that this delayed action is illegal.

The delay of this rule is a good thing for higher education.

The rule’s intent is to protect students who took out student loans to attend an institution, but who did so under false premises, ostensibly protecting students from being misled by institutions that may have misrepresented school costs, falsified job placement numbers, or fabricated the types of degree programs offered.

Schools, however, argue that such a regulatory approach denies them due process and are outside of the scope of the Department of Education’s authority.

DeVos’ department has now delayed the rule, eyeing a potential rewrite, calling the Obama-era version of borrower defense “a muddled process that’s unfair to students and schools, and puts taxpayers on the hook for significant costs.”

Indeed, the cost concerns are serious, as is the potential for such efforts generally to become a slippery slope toward more and more taxpayer-financed student loan forgiveness.

While student loan debt is a serious problem, bureaucratic red tape is not the way to ensure students receive a quality education.

Borrower defense to repayment is in keeping with the status quo thinking about the student debt problem: If students cannot pay their debts, taxpayers should.

The Department of Education has estimated that this rule could cost anywhere between $2 billion and $43 billion over the next 10 years. Rather than simply shifting the burden of student loan debt on to taxpayers, policymakers should pursue new, innovative solutions to lowering the cost of higher education.

To start, policymakers should depart from the regulatory practices of the Obama administration.

I have outlined four regulations that limit the ability of institutions of higher education to thrive, one of which is borrower defense to repayment.

The over-regulation of institutions of higher education forces education dollars to be spent on compliance, rather than academics. This raises the overall cost of attendance.

Furthermore, regulations disproportionately affect new innovative education models, which often do not have the financial footing to comply with regulations, while protecting the education establishment.

Students from all walks of life, and particularly low-income students and nontraditional students, should be able to pursue streamlined, affordable, and efficient education models outside of the traditional four-year bachelor’s degree. This includes online learning, career and technical education, and offerings at for-profit schools.

DeVos is correct to be skeptical of the wisdom of borrower defense to repayment, which operates on a “regulate first, and ask the legal questions later” basis.

Rather than suing over the delayed enforcement of the rule, the states involved should urge policymakers to limit the federal government’s meddling in higher education and start addressing the root cause of high student loan debt.

Limiting the federal government’s role in distributing student loans should be the first thing on their priority list, not the enforcement of a misguided bureaucratic rule.