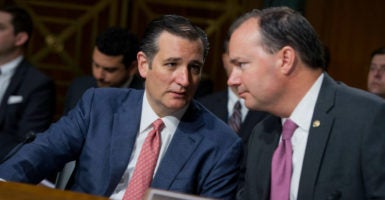 Two conservative senators are proposing an amendment to the GOP’s health care bill that would give consumers more leeway to purchase the health insurance of their choice.

Sens. Ted Cruz, R-Texas, and Mike Lee, R-Utah, announced an amendment called the Consumer Freedom Option that would allow insurance companies to sell any health coverage plan they wish as long as they provide one plan that satisfies the mandates of Obamacare, Townhall reported.

Sen. Ted Cruz handed these out today in Senate lunch. How he can get to yes. pic.twitter.com/WYeQYxbcLe

“A key piece, I think, to getting [the GOP health care bill] passed is an amendment I’ve introduced that I hope will be in the final bill,” Cruz said Wednesday during an interview with Texas radio host Mark Davis.

“The ‘consumer freedom option’ simply says that if an insurance company sells in a given state a plan that is consistent with the Title I mandates, that company can also sell any other insurance plan consumers desire.”

Title I of the Affordable Care Act, popularly called Obamacare, “requires persons to buy ‘qualified health plans,’ those [that] meet all of the benefit mandates and insurance rules … or pay a fine of $695 or an amount up to 2.5 percent of income, whichever amount is greater,” Bob Moffit, a senior fellow and health care expert at The Heritage Foundation, told The Daily Signal in an email.

Cruz’s amendment comes after multiple conservative senators said they oppose the Senate leadership’s health care bill, called the Better Care Reconciliation Act of 2017, because it does not fully repeal and replace Obamacare.

Cruz said if his amendment is passed, consumers will be at an advantage:

Make no mistake, the @SenTedCruz amendment is a hoax. Under the guise of lowering premiums, it makes health care more expensive.

But Michael Needham, CEO of Heritage Action for America, the lobbying affiliate of The Heritage Foundation, told The Daily Signal in an email that the Senate should welcome the amendment.

“What Sen. Cruz is fighting for—a plan that lets states and individuals that want to keep Obamacare do just that while freeing everyone else from the law’s burdensome regulations—shouldn’t be a heavy lift for the party that promised repeal for years,” Needham said of Republicans.

Needham said senators should consider the amendment to bring consensus:

The last several months have taught us a lot. It turns out many Republicans didn’t want to repeal Obamacare at all. Conservatives have made compromise after compromise in these negotiations. It’s time for Sen. Cruz’s colleagues to give his proposal a fair hearing.