This Trump Administration Move Could Have Led to Higher Costs, Fewer Fed From US Food Aid 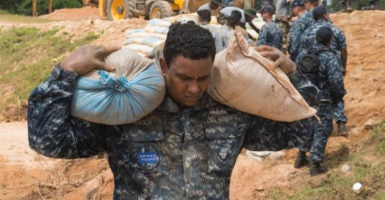 A recent Reuters story reported that the Trump administration is drafting an executive order that would require 100 percent of U.S. food assistance to be shipped on U.S.-flagged vessels.

CNBC has since reported that the Trump administration has reconsidered.

Hopefully this is the case, as requiring U.S. food assistance to be shipped on U.S.-flagged vessels would undermine the impact of U.S. assistance and negate a key justification for the administration’s budget proposal on food assistance.

The United States has been providing food assistance around the world for nearly six decades. It does so for humanitarian reasons to assist suffering populations, but also to support foreign policy interests in bolstering stability in fragile states and crises and to support agricultural development and related projects in developing nations.

The U.S. provides food assistance through a number of programs, but historically the main vehicle has been the Food for Peace (P.L. 480) Title II program. This program has long had requirements mandating that portions of food aid be American-sourced and shipped on U.S. flagged vessels.

Current rules require 50 percent of food aid to be shipped on U.S. vessels.

These requirements significantly increase the cost of providing food aid to recipient populations, both because purchasing food regionally or locally can be cheaper and have lower associated costs because it does not have to be transported as far to the destination.

The U.S. Agency for International Development estimated in 2013 that “local and regional procurement of food and other cash-based programs can get food to people in critical need 11 to 14 weeks faster and at savings of 25-50 percent.”

The result is that between 2 million and 4 million additional people could have benefitted from the same funding at the time.

For this reason, Heritage Foundation analysts have urged the U.S. to eliminate U.S. purchase and shipping requirements to make more efficient use of funds.

Doing the opposite and, instead, increasing these requirements will lead to U.S. food aid being less efficient, more expensive, and helping to feed fewer people.

According to the Reuters article, the Trump administration saw the shipping requirement as a means for creating jobs in the U.S. shipping industry and maintaining shipping capacity for those ships to be used by the military in case of conflict.

This argument has been made for years by the handful of shipping companies that profit from the lack of competition created by food aid shipping requirements.

The application of cargo preference to food aid programs does not significantly contribute to meeting the intended objectives of helping to maintain U.S.-flag ships as a naval and military auxiliary in time of war or national emergency or for purposes of domestic or foreign commerce. … [The Department of Defense] does not view the U.S.-flag ships employed to transport bulk commodities for food aid programs as militarily useful. As for the crews that support those ships, [the Department of Defense] believes that they could be a potential source of manpower for the Ready Reserve Force (RRF) but does not believe that applying cargo preference to food aid programs is a cost-effective means of providing for crews.

The Department of Defense affirmed this conclusion in a 2013 statement to Reps. Ed Royce, R-Calif., and Eliot Engel, D-N.Y., chairman and ranking member of the House Foreign Affairs Committee:

The Department supports the president’s proposed reform of the food aid programs and has assessed that it will not impact U.S. maritime readiness and national security. The Department’s ability to crew the surge fleet and deploy forces and sustainment cargo will not be affected.

For most of the U.S.-flagged ships that carry food aid, food aid cargos constitute a very small proportion of their annual shipments, and those vessels do not rely on food aid as a source of revenue to any great degree. Only a handful of older ships and the mariners employed on those vessels are at any real risk of being adversely affected by reform of the food aid programs, an issue that should be included in an assessment of the effectiveness and costliness of support provided by [the Center of Political and Foreign Affairs]. Using the [Department of Defense] estimate that cargo preference for food aid provides employment for 360 and 450 mariners who are U.S. citizens, provided during the 2013 congressional food aid reform debate, their availability for duty in a surge fleet comes at an annual cost to the U.S. food aid programs of between $86,666 and $138,333 per mariner. However, this subsidy does not even ensure that those mariners will be willing to serve in a surge fleet, only that they hold the requisite certification and thus are eligible to serve if they so choose.

Finally, this policy runs counter to the reasoning behind the food assistance budget request in the administration’s fiscal year 2018 budget:

There is no request for P.L. 480 Title II, as part of an administration effort to streamline foreign assistance, prioritize funding, and use funding as effectively and efficiently as possible. The fiscal year 2018 request includes funding for emergency food needs within the more efficient International Disaster Assistance account.

The main efficiency rationale for providing food assistance through the International Disaster Assistance account rather than P.L. 480 is to circumvent the U.S. food sourcing and shipping requirements, i.e. to allow less funding to reach more people through efficiency gains.

What is the point of using the International Disaster Assistance account and then mandating even more stringent shipping requirements than currently exist for P.L. 480?

The bottom line is that this is a bad policy that should be discarded by the Trump administration.

American taxpayer dollars are squandered by requirements that artificially increase the cost of food aid. Fewer starving people in dire circumstances around the world will benefit from the generosity of the American people. U.S. security will see minimal discernable benefit.

The only beneficiaries will be U.S. shippers that have navigated the Washington swamp so successfully over the years that they can benefit at cost to American taxpayers.

Thankfully, the Trump administration seems to be coming to this realization.