In Dissent, Justices Thomas and Gorsuch Defend the Second Amendment 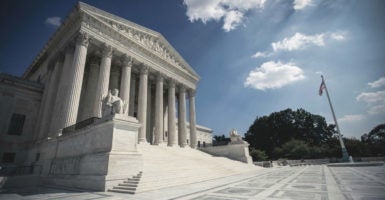 California law requires residents to prove they have “good cause” to carry a firearm in order to receive a concealed carry permit. (Photo: iStock Photos)

The Second Amendment is subject to persistent threats these days, and it didn’t receive any help from a majority of the Supreme Court last week.

By a margin of 7-2, the court denied review in a gun rights case out of the 9th U.S. Circuit Court of Appeals, Peruta v. California.

The decision leaves in place a troubling California statute requiring residents to prove to their county sheriff that they have some “good cause” to carry a firearm in order to receive a concealed carry permit.

Justice Clarence Thomas, joined by Justice Neil Gorsuch, authored a dissent that explains why the court’s decision not to hear the case is disappointing.

Heller required the District of Columbia to let residents keep firearms within their homes for lawful self-defense. McDonald extended that ruling to the states. But neither squarely addressed the right to bear arms beyond your doorstep.

Several states have since used that ambiguity to treat the Second Amendment as a blank slate for gun regulations.

For example, law-abiding Californians who wish to carry a firearm in public must obtain a concealed carry permit—a fairly routine requirement. First, though, they must persuade their sheriff that they have a sufficiently compelling and adequately documented need to carry a gun, and that need must be greater than a general safety concern.

Viewing this requirement as infringing on his inherent right to bear arms, Edward Peruta and his fellow petitioners challenged the statute in federal court.

It seems that California is deliberately making it virtually impossible to carry a gun in public, so it comes as no surprise that less than 1 percent of Californians have the necessary permit.

Gun control advocates assert that depressing gun ownership must surely result in fewer firearms incidents. But a 2015 report from the Centers for Disease Control and Prevention shows that both states were neck-and-neck in terms of incidents of firearm mortality: 3,095 in California, and 3,203 in Texas.

Thomas notes in his dissenting opinion that initially Peruta won a victory at the 9th Circuit Court of Appeals.

Judge Diarmuid O’Scannlain wrote that majority opinion in a 2-1 decision, stating that “the carrying of an operable handgun outside the home for the lawful purpose of self-defense … constitutes bear[ing] arms within the meaning of the Second Amendment.”

But the 9th Circuit decided to rehear the case en banc (which in the 9th Circuit means that the case will be reconsidered and heard by 11 of that court’s 29 judges selected at random) and reversed the panel’s decision.

The 9th Circuit held that “the Second Amendment does not preserve or protect a right of a member of the general public to carry concealed firearms in public.”

The en banc court identified “general categories” when the Second Amendment “does, or does not, exist.”

Carrying a firearm for personal protection, the court wrote, requires proof of “documented threats, restraining orders and other related situations where an applicant can demonstrate they are a specific target at risk.” “Self-protection and protection of family (without credible threats of violence)” isn’t enough.

Peruta appealed, unsuccessfully, to the Supreme Court. In his dissent, Thomas explained why Peruta’s case matters.

To start, he argued, courts should not be cherry-picking constitutional rights to expand or diminish.

Thomas described the 9th Circuit’s approach as “indefensible,” and California’s scheme as part of a “distressing trend” of treating the Second Amendment “as a disfavored right.”

“The Constitution does not rank certain rights above others,” Thomas wrote, “and I do not think this Court should impose such a hierarchy by selectively enforcing its preferred rights.”

For those of us who work in marbled halls, guarded constantly by a vigilant and dedicated police force, the guarantees of the Second Amendment might seem antiquated and superfluous. But the Framers made a clear choice: They reserved to all Americans the right to bear arms for self-defense. I do not think we should stand by idly while a state denies its citizens that right, particularly when their very lives may depend on it.

California remains one of several states that require proof of good cause to obtain a permit. And the Supreme Court must “await another case” to consider Thomas’ and Gorsuch’s views on the subject.

But their dissenting opinion offers lawmakers plenty to mull over in the meantime.