Meet the Socialist Leader Who’s Driving Bolivia Into the Ground 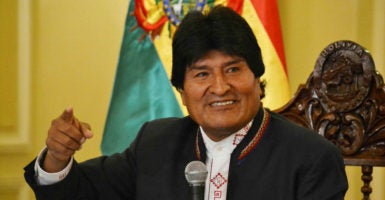 Bolivian President Evo Morales has nationalized key energy sectors, cracked down on the press, and spent over $2 billion on pet projects. (Photo: Handout/Reuters/Newscom)

Socialist Evo Morales has been president of Bolivia for over a decade.

Although he claims to be working for the people, his populist policies have been a major roadblock on Bolivia’s path to economic growth and development.

During the Morales years, Bolivia has plunged in The Heritage Foundation’s annual Index of Economic Freedom. It remains the poorest country on the South American continent.

At a June 13 presentation at the National Endowment for Democracy, Bolivian journalist Raul Peñaranda and Ronald MacLean-Abaroa—the first democratically elected mayor of La Paz—had little good to say about Morales.

Since assuming office, they report, Morales has squandered roughly $2 billion on pet projects—for example, a world-class museum dedicated to himself (complete with his soccer jersey collection) in the isolated village of Orinoca, his hometown. He also commissioned a 15,000-seat stadium in Chimoré, a town of only 11,000.

Peñaranda also pointed to factories built without basic logistical infrastructure and a sugar processing facility far from any source of raw sugar.

The price tags for many of these projects are alleged to have included kickbacks for Morales and his inner circle.

The Guardian reports that Morales offered government contracts to a Chinese company where his girlfriend works. He also used military force to nationalize petroleum and natural gas facilities, turning one of the country’s most promising industries into a political slush fund.

To suppress dissent, Morales cracked down on the press. As Freedom House notes, he has punished political opponents and corrupted the judiciary. MacLean-Abaroa said, “Behind Evo Morales is a systemic effort to deconstruct democracy in Bolivia.”

According to Peñaranda, Bolivia has more political exiles than any South American country. Substantive efforts by citizens and the international community to establish institutions like an independent judiciary or basic rule of law have gone nowhere.

As MacLean-Abaroa said, if this state of affairs continues, “we are going to follow the road to serfdom.”

Bolivia is blessed with many resources and a strategic location. Unfortunately, the current administration has thwarted any hope of economic progress. Unless and until Morales permits political freedom and cleans up corruption, the future of Bolivia looks bleak.