How Environmental Groups Are Responding to Trump’s ‘Solar Wall’ Pitch 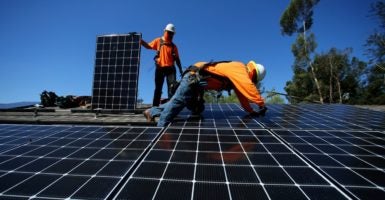 Solar installers from Baker Electric put in new solar panels on a residential roof in San Diego. President Donald Trump has touted using solar panels as a way to mitigate costs for the wall along the southern border. (Photo: Mike Blake/Reuters/Newscom)

“This way, Mexico will have to pay much less money,” @POTUS says.

“The problem with talking about solar panels on Trump’s border wall is that it’s science fiction,” Travis Nichols, a spokesman for Greenpeace, a liberal environmentalist group, told The Daily Signal. “Just like clean coal does not exist and will never exist, Trump’s wall with solar panels won’t exist, so it’s irrelevant to discuss climate issues.”

A spokesman with the Sierra Club referred to a tweet storm by the Sierra Club executive director, Michael Brune, reacting to Trump’s proposal for solar panels on the border wall.

Trump also spoke to 1 of his worst ideas: a border wall. But this time, he wants to put solar panels on it

No matter how you dress it up, a border wall is still a terrible idea and an ecological disaster #NoBanNoWall

Speaking Wednesday in Cedar Rapids, Iowa, Trump proposed putting solar panels on the wall. Such panels would capture power along the hot southern border, to help increase the power supply, which the president said would help pay for the wall.

“We’re thinking of something that’s unique, we’re talking about the southern border, lots of sun, lots of heat. We’re thinking about building the wall as a solar wall, so it creates energy and pays for itself. And this way, Mexico will have to pay much less money,” Trump told the Iowa crowd.

“And that’s good, right? Is that good? You are the first group I’ve told that to. A solar wall. It makes sense. Let’s see. We are working it out. Solar wall panels.”

There would likely be more effective ways to pay for the wall, said Steven Camarota, director of research for the Center for Immigration Studies, a pro-border enforcement think tank.

“It is one of the sunnier parts of the country, but solar panels are fairly fragile,” Camarota told The Daily Signal. “Each illegal border crosser has a cost of about $75,000 for taxpayers. A modest reduction in border crossings could help pay for the wall.”

Camarota, who believes interior enforcement is perhaps more important than the wall, said the reduction in needed law enforcement and health costs from drugs not entering the country would also offset the costs.

There are too many uncertainties to know whether this would cover the cost of the border wall, said Nick Loris, a research fellow in energy and environmental policy at The Heritage Foundation.

“It’s entirely too early to tell and there are too many outstanding questions. If the solar panels are subsidized, we’re just paying for them through another mechanism,” Loris told The Daily Signal. “It’s difficult to know what the solar panels would cost, how much energy they’d produce standing vertically as opposed to angled horizontally like you see at a solar farm or a rooftop.”

You also have to factor in the transmission lines to take the energy from remote places to where it’s needed. There’s repair, replacement, and waste costs. They’re also not very efficient compared to other forms of energy, which is why they only account for a meager 2 percent of our net electricity generation, even with generous support from the taxpayer. There’s a lot of question marks surrounding the project so that it’s difficult to know how costly or beneficial it would be.

A Wall Street Journal op-ed headlined “A Shiny Border Wall That Pays for Itself” by Vasilis Fthenakis, an earth and engineering professor at Columbia University, and Ken Zweibel, director of the Solar Institute at George Washington University, contends:

Resolving the political impasse between Mexico and the U.S. over a border wall requires innovative thinking. How about this: Presidents Donald Trump and Enrique Peña Nieto should work together to construct a ‘solar wall’—a massive string of photovoltaic panels—on the Mexican side of the border.

Another op-ed in the liberal Huffington Post on Dec. 16, 2016, “Instead of Trump’s Wall, Let’s Build A Border of Solar Panels,” by Homero Aridjis, a poet and novelist, and James Ramey, a professor at Metropolitan Autonomous University and member of Mexico’s National System of Researchers, said:

There is indeed a way that Mexico could create a barrier between the U.S. and Mexico, one constructed exclusively on the Mexican side, with substantial benefits for both countries and the planet: a solar border. …

If one were to construct the equivalent of a strip of arrays one-third the width of a football field south of the entire U.S.-Mexico border, wider in some areas and narrower in others, with a wide berth allowed for populated areas and stretches of rugged terrain, sufficient energy might be produced to also supply Los Angeles, Las Vegas, Albuquerque, Dallas, and Houston. For the U.S. cities, it would be a way to obtain cheaper and cleaner energy than they can from other sources.