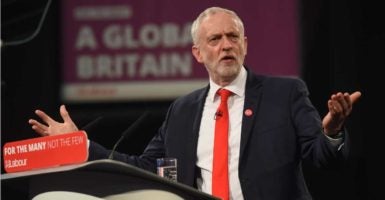 Great Britain is set to hold a “snap” election on Thursday. Currently, the conservative Tories hold power in Parliament, but are being challenged by the Labour Party in what could be a hotly contested race for power.

The Conservative Party is expected to win, but if Labour prevails, British leadership would undergo a dramatic shift.

When many Americans think of the British Labour Party, they often think of Tony Blair, the prime minister who cooperated with former President George W. Bush in the early 2000s and supported the Iraq War.

A Labour victory in Thursday’s election would mean Prime Minister Theresa May could be replaced by far-left challenger Jeremy Corbyn, who stunningly rose to lead his party in 2015 after serving as a member of Parliament since 1983.

Corbyn is far removed from the Blair mold. He has been called the “Bernie Sanders” of British politics and holds radical views on issues across the board, from foreign to domestic policy. He may be even more extreme than the socialist senator from Vermont.

Corbyn has been stridently anti-Israel, has openly praised Communist dictators, and has even worked with terrorist-linked organizations such as the Irish Republican Army, Hamas, and Hezbollah.

It would be an understatement to say that a Corbyn-led British government would differ sharply from any in recent memory.

A Threat to the Special Relationship

In 1946, Winston Churchill delivered his famed “Iron Curtain” speech in Missouri, where he first described the “special relationship” between Great Britain and the United States and how important it was to opposing tyranny.

American and British leaders have cultivated this close alliance since that time—most notably Ronald Reagan and Margaret Thatcher, who worked closely during the late stages of the Cold War.

This tradition was continued by Bush and Blair at the start of the war on terror, but had been diminishing during Barack Obama’s presidency.

Corbyn would likely double down and create more distance between the two countries. The Heritage Foundation’s Nile Gardiner described Corbyn’s rise to Labour leader as “the biggest threat to the special relationship since the end of the Cold War.”

This danger would go up several notches if he actually manages to become the prime minister.

Corbyn has been a frequent critic of U.S. foreign policy, and in 2015 called the “American century” bad for the world and laid many of the world’s problems on the Anglo-American alliance.

He has blamed the U.S. and the West in general for the rise of Islamist extremism. Most recently, in response to the recent terrorist attack in Manchester, Corbyn was quick to blame Western involvement in the Middle East as the cause.

This was nothing new from a man who called the death of Osama bin Laden at the hands of American special forces a “tragedy” in 2011.

Yet Corbyn’s hostility to traditional U.S. and U.K. foreign policy extends beyond opposition to anti-terrorism policies. He called the U.S.-backed NATO a “danger to world peace” and wants to strip British ties to the international defense organization.

On top of this, he has demanded a significant reduction in Britain’s defense spending and a reduction of nuclear deterrence policies to create a “nuclear-free world.”

These positions have even caused some concern to those on the left. The Washington Post editorial board wrote that Corbyn has a “radically anti-American agenda that could accentuate Britain’s drift away from the trans-Atlantic partnership.”

Besides espousing anti-American views, Corbyn is hostile to the other country with which the U.S. has built a special relationship: Israel.

This puts him deeply at odds with U.S. foreign policy and President Donald Trump’s pivot toward recultivating the American relationship with Israel after years of friction.

According to the Post, Corbyn “espouses a foreign policy whose guiding principle is to oppose the United States and Israel by all means.”

Corbyn’s hostility to Israel is nothing new. He has been one of the Jewish state’s most consistent critics during his time in office, and has even had frequent contact with Holocaust deniers.

In a 2013 letter to Britain’s foreign secretary, Corbyn recommended that Britain “stop allowing Israel’s criminal politicians to come to our country freely” and caused a stir in 2016 when he compared Israel to the Islamic State.

Corbyn once described Hezbollah—the Iran-backed political organization that the U.S and U.K. have labeled a terrorist group—“friends.”

He later said that he regretted using this “inclusive” language to describe the group, yet didn’t back away from his decision to invite representatives of the group to speak in Parliament.

He has also made common cause with Hamas, the Palestinian political party whose charter calls for the destruction of Israel and Jews. In 2009, Corbyn asked for Hamas to be removed from the U.K.’s terror list.

“At some point,” Corbyn said, “Hamas should be removed from this list because contacts with Hamas by politicians are increasing day after day. All want to find a peaceful solution to the problem.”

Besides his fanatically anti-American foreign policy views, Corbyn is also generally committed to the politics of redistribution.

A recently leaked 43-page document shows that he intends to nationalize industries and put wage caps on businesses, while drastically increasing the size of government. This plan will be carried out with massive increases in taxation.

While many of the aims of this manifesto are in line with other traditional Labour priorities, it drew quick praise and an endorsement from Britain’s Communist Party.

This is only Corbyn’s most recent connection to Communists. His campaign manager, Andrew Murray, had reportedly been a member of the Communist Party for decades before joining Labour in December.

And Corbyn himself has also not shied away from posthumously praising Communist dictators. When Cuba’s Fidel Castro died in 2016, Corbyn hailed him as a “huge figure” in modern history and a champion of social justice.

Corbyn said of the deceased tyrant: “From building a world-class health and education system, to Cuba’s record of international solidarity abroad, Castro’s achievements were many.”

While the chances of Corbyn ascending to power remain remote, his far-left and anti-American views put him radically out of step with traditional British policies.

It’s foreboding that Corbyn’s rise comes at a time when the country faces fierce challenges, such as the Brexit pullout of the European Union and increasingly frequent terrorist attacks.

If the British people put Corbyn in power, they risk severing ties with their closest international relationships and economic catastrophe. Americans of good will must hope for the only favorable outcome this Thursday: a resounding Conservative victory.