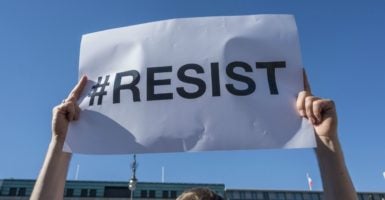 Various Democratic officials have vowed to implement the goals of the Paris climate agreement, despite President Donald Trump pulling out of the deal. (Photo: Omer Messinger/ZUMA Press /Newscom)

Democratic officials have vowed to implement the goals of the Paris climate agreement, despite President Donald Trump’s decision to withdraw from the accord Thursday.

New York City Mayor Bill de Blasio vowed to issue an executive order soon to honor the goals of the Paris accord, including to keep future global warming below 2 degrees Celsius.

“On behalf of the people of New York City, and alongside mayors across the country, I am committing to honor the goals of the Paris Agreement with an Executive Order in the coming days, so our city can remain a home for generations to come,” DeBlasio said in a statement Thursday.

Pittsburgh Mayor Bill Peduto also vowed to follow the “guidelines” of the Paris Agreement, although he gave no specifics.

As the Mayor of Pittsburgh, I can assure you that we will follow the guidelines of the Paris Agreement for our people, our economy & future. https://t.co/3znXGTcd8C

“We will not ignore the science and reality of climate change, which is why I am also signing an Executive Order confirming New York’s leadership role in protecting our citizens, our environment, and our planet,” Cuomo said.

“If the president is going to be AWOL in this profoundly important human endeavor, then California and other states will step up,” Brown said.

It’s part of what former Vice President Al Gore is calling the “clean energy revolution” that would be crippled by pulling out of the Paris climate agreement. Gore said “no single person” can stop the “revolution”—that apparently needs a lot of political will to further.

My statement on Today’s Decision by the Trump Administration to Withdraw from the Paris Agreement: https://t.co/eDEFv5b1nS pic.twitter.com/SzHJU3D0Mr

San Francisco billionaire Tom Steyer circulated an email petition Thursday, calling on supporters to “urge your governor to fulfill the commitment your state has already made to meet our Paris targets: Go to 100 percent renewable energy.”

“It’s now up to states, cities, and local communities to pick up the mantle of leadership and take the actions necessary to protect our children and leave them a better world,” Steyer wrote in the email blast.