Trump Signals a Reset Between Israel and US 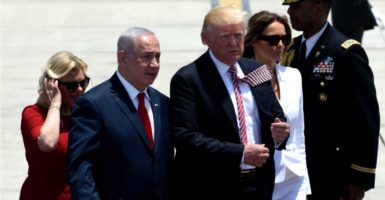 It’s time to patch up America’s second “special relationship” after eight years of frayed feelings between the United States and Israel.

That’s the message President Donald Trump is sending in his early-presidency trip to Israel and unprecedented visit to the Western Wall in Jerusalem.

Trump said of his Monday visit to the Western Wall, a first for sitting American presidents, that the visit was potentially a path to a “deeper” friendship with Israel.

Conflicts over policy and philosophy strained the relations between former President Barack Obama and Israeli Prime Minister Bibi Netanyahu and led to distrust between the two countries.

By going out of his way to entreat with Israel, Trump is at least signaling that a reset is in store.

Israel plays an essential role in American foreign policy—and not only in the Middle East. The war against radical Islamists has global implications in which the two countries have overlapping interests.

It is almost taken for granted today that Israel has been such a reliable foreign policy partner. This was only due to the careful diplomacy and alignment of key national and cultural interests between the two countries.

The nature of this partnership in many ways mirrors the so-called “special relationship” between Great Britain and the United States.

However, it is important to remember that before World War II, the U.S. and U.K. spent a century as mortal enemies and had deep reasons to distrust one another.

World War I pushed the U.S. and U.K. closer together after a century of suspicion and hostility. The fires of World War II and the Herculean efforts of British Prime Minister Winston Churchill sealed a the long-term collaboration between the countries—an example of the importance of wise statesmanship from American and British leaders.

It is important for American leaders to recognize and cultivate just such a relationship with Israel.

While the United States has always been supportive of Israel’s nationhood since 1948, the two countries were not always so intertwined. The complex nature of the Cold War in the Middle East occasionally put the U.S. and Israel at odds.

U.S.-Israel ties grew closer after Israel defeated a coalition of Arab states backed by the Soviet Union in the Yom Kippur War and the country proved itself to be a valuable Cold War ally.

The wisdom of this cooperation is even more apparent after the rise of radical Islamist sentiment that became a cornerstone aspect of American foreign policy after the terrorist attack on 9/11.

Israel was in a prime position to help combat this pernicious ideology, which has strong ties in the Middle East.

Trump addressed a few major issues of immediate concern to the U.S. during his visit to Israel.

Of course, the thorn of the Islamic State, also known as ISIS, and other radical, subnational Islamist groups in the region remain high on the U.S. agenda, and Israel is a key partner in destroying these factions.

But the national threats of Syria and Iran, which have acted recalcitrantly toward the West and are well-known funders of terrorist groups, are of particular concern and also require close cooperation with Israel.

Trump has already shown that he is willing to make limited strikes in Syria to enforce the red line on chemical weapons. This action was strongly supported by Israel, and was seen as a rebuke to both Bashar Assad’s regime in Syria and also Iran.

On Monday, Trump sent a strong message to Iran that its terror funding and nuclear ambitions would not be tolerated.

>>> Where the Fight Against ISIS Stands, and How the US Can Win

Trump has not yet followed through on his promise to tear up the Obama administration’s 2015 nuclear deal with Iran, pending a formal policy review of whether the nuclear deal advances vital American national interests.

Nevertheless, Trump said in a speech that Iran was guilty of “deadly funding, training, and equipping of terrorists and militias,” and that it acted inappropriately after the deal took place.

As Phillips noted, it is vitally important to either change the terms of this treaty or step away from it entirely to stem Iran’s “continued support for terrorism, expanding ballistic missile program, and deepening military intervention in Syria.”

Israel is among the most important counterweights to this hostile regime in the Middle East, especially in upholding economic sanctions and controlling arms flowing to and from Iran.

Trump made numerous commitments regarding Israel during the campaign.

Currently, his promise to officially recognize Jerusalem as Israel’s capital and move an American embassy there has failed to materialize. This remains a thorny issue for the Palestinians in particular. It would also create a challenge for Trump’s desire to broker the “ultimate deal” between Israel and the Palestinians.

Trump has expressed a desire to create some kind of lasting solution for the Israeli-Palestinian conflict, an issue that has become a white whale for American presidents from Jimmy Carter to Obama.

All of these attempts have failed to achieve any kind of lasting peace, and some have exacerbated the conflict.

Sticking points like the “right of return” for Palestinians, the status of Jerusalem, the future of Israeli settlements, and the redrawing of borders are unlikely to be resolved anytime soon, given the glaring lack of trust and wide gaps in the negotiating positions of Israel and the Palestinian Authority.