We Hear You: ‘The Objective of Communism Is Total Servitude’ 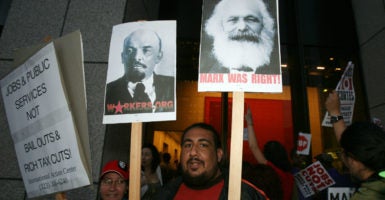 Editor’s note: Walter Williams’ commentary on communism’s racist roots proved to be one of our our most popular pieces in the past week. Today’s mailbag begins with another take on that history.—Ken McIntyre

Dear Daily Signal: The Karl Marx quotes in Walter Williams’ commentary were very relevant to a recurrent aspect of communism that I never have understood (“The Ugly Racism of Karl Marx”).

I grew up in communist Cuba, where I endured about eight years of daily Marxist, Leninist, and Castroist propaganda. I was drowned in brainwashing, revisionist politics in compulsory, government-run school all day, and my father tried to undo the damage at night with talks and alternate readings.

It may be the case, as Mr. Williams indicates, that Karl Marx was a racist in the context described. However, this misses the point of current “practice” of extreme-left and communist sociopolitical control: Communism goes beyond racism and intellectual capabilities into a more insidious method of antihuman control at every level.

The objective of communism is total servitude by the citizen to the elite pyramid controlling the government by means of brainwashing and fear. Communism is indeed colorblind. Any arguments for or against communism based on racism is, with all respect, a distraction from the true communist control ideas and methods.

Individuals in a single-race communist society are as equally oppressed as those in a multi-ethnic communist one.

A more interesting question is why certain ethnic groups in history up to the present seem to align themselves with communism—even when communism is and has been detrimental to these groups in the past?

These same ethnic groups do not align themselves with other social orders that have been detrimental to them. I do not understand the possible answers to this question.

What makes the same old communist methods so effective as a society control over many generations?

I absolutely can understand the benefits for those at the top of the elite pyramid “selling” failed ideas to those below. I do not understand the appeal to those poor or soon-to-be-poor to support such a false set of beliefs for most of their lives.

It is a form of enslavement from which some people do not want to be mentally emancipated. No facts or pragmatic arguments make them change their beliefs.—Rolando Menendez

SEIU is an insidious union known for many years for their crooked and illegal activities, all with the apparent validation of corrupt local government officials in every state and county in our country.

I fervently hope this endeavor will prevail in the courts and in so doing, will, additionally, help root out some of the most egregious officials, without whom it wouldn’t be as easy for SEIU to continue their usual, abominable behavior.—Judy Scardina, Richmond, Va.

Dear Daily Signal: I just read Kevin Mooney’s story in The Daily Signal about the home caregiver in Minnesota who got SEIU union dues taken out of her check even though she didn’t join the union.

I live in Washington state and was caring for my special needs son before he passed away. The union wasn’t involved when I first started receiving payment through the state Medicaid program called COPES. My son turned 18 in 1992, so it was some time shortly after that.

Then SEIU reared its ugly head, and I suddenly was paying dues for a union I did not want to belong to. I was the mother of this child, and yet I was forced to pay these dues.

I don’t remember now how many hours a month I was getting paid for, but it wasn’t much in comparison to the 24/7 care I provided. That continued until my son died in 2004.

Several years later, I took care of a woman for four months when she had a stem cell transplant.  Since I had been in the COPES program before, I got reinstated for the caregiver program.

I did not join the union again, but they took dues out of my check anyway. It is criminal what these folks get away with.—Carol Sorsdahl

Dear Daily Signal: Kevin Mooney is to be highly commended for his extensive work and articles bringing to light the truth regarding the SEIU and the personal care assistants in Minnesota. I hope he continues his efforts until these unionization activities are eliminated.—Bill Mangum, Pasadena, Calif.

‘I Can Attest to the Dramatic Change’

Dear Daily Signal: Thank you for Kelsey Harkness’ video report on the border fence, or wall, near San Diego (“Underreported: How Building a Border Wall Changed San Diego”).  I can attest to the facts relayed about the dramatic change made, as the retired agent in charge of the Imperial Beach, California, station who began Operation Gatekeeper in 1994 and our systematic re-enforcement of the border between Tijuana and San Diego with a variety of technologies, including the fence.

The histories of the changes from pre-fence to post-fence never were properly compared and so the discussion of its validity continues today.  Thus, unfortunately, it has let emotions compromise the facts that support public safety.

There is another story of public safety and changes that have taken place across the border as well. The specific crimes related to the uncontrolled border extends in both directions.

I realize it is such a vast story that it is hard to document in a short video.  I would love to see it develop into a slightly longer documentary. But again, thank you for this report.—William Pink

Republicans and the Knack of Winning

Dear Daily Signal: How about that! We have a new health care plan (“Here Are the Challenges Facing the Senate After House Passes Obamacare Replacement Bill”). Early indications are that it is, in fact, a good plan that works for everybody. Let’s hope the Senate OKs it quickly.

The Democrat naysayers will pout  and make up imaginary negatives, but they have no plan of their own. And they don’t seem to care that the Unaffordable Care Act is falling down around them, leaving hundreds of thousands of people with no protection and no choices. They’re the party of negatives and denial.

Now that the House has done its health care job, I suspect that a revolutionary new tax plan will be close behind as Republicans’ next major offering. They may finally be getting the knack of winning.—C.M. Cowles

Dear Daily Signal: Wow. Great piece by Sharyl Attkisson on the hoodwinks we are so quick to accept (“The Growing Problem of ‘Fake Science’”).

Will think twice about new drugs and ads in the future. I like the idea of waiting five years for a drug to be on the market before using it. Thanks for this insight, Sharyl.—Gary Radford, Fayetteville, N.Y.

Dear Daily Signal: It started out as a good week for comedian John Oliver. On Sunday, the British-born Oliver ranted on his HBO show about the Federal Communications Commission’s telecom reform, made personal attacks on FCC Chairman Ajit Pai, and then asked viewers to send their comments to the FCC (“FCC Chairman Set to Roll Back Obama’s Overbearing Net Neutraility Rules”).

On Monday, the liberal media heralded Oliver’s political stand and call to action, pointing out that it had crashed the agency’s website. Then the truth came out.

Later Monday, the FCC announced the website’s crashing was not the result of Oliver’s comments, but a deliberate “denial of service” attack.

On Tuesday, an examination of viewer comments by The Washington Free Beacon proved them at best to be bots leaving fake messages and at its worst liberals making racist comments and threats of violence.

But Wednesday, the New York Observer reveals that Oliver, the champion of the working man and critic of the wealthy and connected, used his own wealth and connections to dodge New York property taxes on his multimillion-dollar penthouse.

Praying for the President

Dear Daily Signal: President Trump doesn’t need the media, and neither do we. Stay the course. The Lord will continue to guide him in everything he does. We do not listen to the fake news or anything coming from the Democratic Party.

We are with the president all the way for the next eight years. Let’s pray for our president, his marriage, his family, and his Cabinet. The Lord will continue to help them making every decision for this country.—Al and Fe Roode

Dear Daily Signal: On April 2, the Los Angeles Times published an editorial entitled “Our Dishonest President.” It inspired me to write a parody called “Our Dishonest Media.” I hope you like reading it. You may reproduce it or link to it if you wish.—Jack Garman, Los Angeles

Thank you for providing an alternative to the mainstream hysteria. It’s refreshing to read articles that don’t have a liberal bias or tell me what to think. I would be happy to pay for an app if it were available. Please consider adding this platform for your readers.—Rebecca Hockridge

Congress should not have their own health care plan. They should be included in the new plan. Beware the Kushners.—Carol Carter

“Happy Cinco de Mayo?” What is that? Cinco de Mayo is a fake holiday. Why is The Daily Signal trying to legitimize it? It is certainly not an American celebration.—James Soltis

The state of Texas has become the 11th state to join the Convention of States movement. Many of us, even in California, think this is the only solution to the madness which is the Washington, D.C., cult of power.  Will your think tank and publications join us?—Thomas Rud

I support The Daily Signal in promoting prayer.  Religious or not, prayer is a great thing.—Carol F.

Ryan somebody wrote an article complaining about Trump’s religious executive order (“Trump’s Executive Order Fails to Address Pressing Religious Liberty Threats“). I guess complaining is all you liberal, leftie, biased media types do these days. Nothing ever makes you happy. Get over it.—Dorothy Taylor