Here’s a Pay Gap Worth Being Concerned About 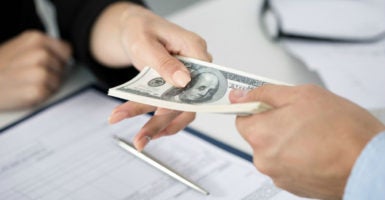 We’ve heard about the alleged “wage gap” between men and women, but what about the real pay gap between private and public sector employees?

An updated report from the nonpartisan Congressional Budget Office shows there is a growing gap between the compensation earned by federal and private employees with the same qualifications.

After accounting for differences in education, experience, and occupation, the report concluded that the federal government provides its workers with 17 percent more compensation than similar employees earn in the private sector.

That’s up from a reported 16 percent gap five years ago. That means the government could save an estimated $31 billion a year by bringing federal compensation in line with the private sector.

Under other compensation comparisons, the gains would be even larger.

With various studies showing such a large compensation differential for federal employees, the government should be able to attract and retain some of the best and brightest workers.

But the way the compensation differential plays out actually achieves the exact opposite. That’s because the federal government massively overcompensates low-skilled workers while undercompensating, or penalizing, highly-skilled ones.

Federal employees with no more than a high school degree receive a 53 percent compensation differential (a 34 percent pay difference and a whopping 93 percent difference in benefits).

This kind of anomaly is possible only because the government operates outside the marketplace.

Such glaring gaps would never stand in the private sector where workers’ compensation is based on their productivity, and where employers who under or overcompensate employees lose out to competitors and may go out of business.

Not only would such reforms make the federal government more competitive with the private sector—allowing it to attract and retain the best and brightest workers—but it would also save a pretty penny for the taxpayer.