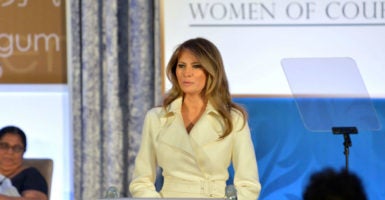 The most headline-grabbing observance of Women’s History Month last month may have been “A Day Without a Woman.”

On March 8, the feminist-led event marked International Women’s Day by staging “a demonstration of economic solidarity” in which women were encouraged to take the day off, avoid shopping, and wear red.

Meanwhile, the U.S. State Department participated in two events last month that highlighted the achievements, challenges, and real needs of women around the globe in a more serious and constructive way.

Ambassador Nikki Haley, permanent representative of the United States to the United Nations, led the U.S. delegation to the annual meeting of the U.N.’s Commission on the Status of Women, which this year discussed the priority theme of women’s economic empowerment in the changing world of work.

Much of the outcome document—which acts as an exhortation, and is not binding on member states—discussed issues of tangible importance to women and girls across the world in achieving greater economic empowerment.

The consensus document that finally emerged at the end of the meeting yielded far better language affirming human dignity than in recent years, thanks in part to U.S. leadership.

Additionally, the U.S. made a statement confirming the U.S. position that the Beijing Declaration and Platform for Action documents, which the commission references every year, “do not create new international rights, including any ‘right’ to abortion.”

These statements serve as good reminders that being genuinely pro-woman is consistent with being pro-life. It also recognizes that women’s diverse needs and goals should not be reduced solely to matters of sexuality and fertility.

To that end, the State Department last week showcased 13 exceptional women from around the world at the Secretary of State’s International Women of Courage Awards.

These women of diverse race, religion, nationality, and age each exemplified courage, bravery, perseverance, and personal sacrifice in enduring and overcoming the many challenges they faced.

For example, Sister Carolin Tahhan Fachakh, a Syrian Catholic nun, risks her life daily to run a nursery school in war-torn Damascus for Muslim and Christian children, and a tailoring workshop for displaced women of both faiths.

Natalia Ponce de Leon survived an acid attack at the hand of a stalker, and has since worked to promote legal and medical reforms in Colombia to benefit other victims.

In her comments at the ceremony, she spoke about the importance of forgiveness and gave a powerful testimony to the personal growth that she has experienced as a result of overcoming her tragedy.

As first lady Melania Trump, who presented the awards, said, “We must continue to stand together with the steadfast goal of making our world safer through acts of collaborative and individual bravery. As we all know, wherever women are diminished, the entire world is diminished with them.”

These events are an encouraging sign of direction under the new administration, which would do well to seek to advance women’s empowerment at home and abroad by championing freedom, equality under the law, and respect for human rights through the pursuit of policies that are pro-life, pro-family, and ultimately pro-woman.

As the International Women of Courage awardees’ inspiring stories of striving for justice, peace, equality, and accountability illustrate, women’s concerns cannot be reduced to sexual and reproductive rights.